Described by H.R.H. The Prince of Wales as “a light unto this nation” and by former British Prime Minister Tony Blair as “an intellectual giant”, Rabbi Lord Jonathon Sacks was recently named the winner of the 2016 Templeton Prize in recognition of his “exceptional contributions to affirming life’s spiritual dimension.” 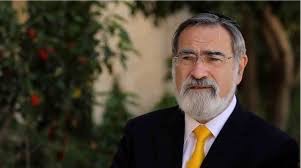 Sacks, who served as Chief Rabbi of the United Hebrew Congregations of the Commonwealth between 1991 and 2013, is an international religious leader, philosopher, award-winning author and respected moral voice. His acceptance speech on May 26 was an astute observation of how we can transform  the state of the world. He began by saying, “Most societies, for most of history, have been either tradition-directed or other-directed.” Some might call these labels “outer-directed.” Sacks then made this distinction:

Inner-directed types are different. They become the pioneers, the innovators and the survivors….They take daring but carefully calculated risks. When they fail, they have rapid recovery times….They have discipline. They enjoy tough challenges and hard work. They play it long. They are more interested in sustainability than quick profits. They know they have to be responsible to customers, employees and shareholders, as well as to the wider public, because only thus will they survive in the long run….They don’t consume the present at the cost of the future, because they have a sense of responsibility for the future. They have the capacity to defer the gratification of instinct. They do all this because they have an inner moral voice. Some call it conscience. Some call it the voice of God.

Rabbi Sacks went on to provide some historical perspective: “…civilizations begin to die when they lose the moral passion that brought them into being in the first place,” the implication being that our modern civilization is beginning to die.

The Templeton Prize, valued at £1.1 million (about US$1.5 million), is one of the world’s largest annual awards given to an individual and honors a living person who has made exceptional contributions to affirming life’s spiritual dimension, whether through insight, discovery, or practical works.  The announcement was made at a news conference on May 26, 2016 at the British Academy in London by the John Templeton Foundation, based in West Conshohocken, Pennsylvania.  The Prize anchors the Foundation’s international efforts to serve as a philanthropic catalyst for discoveries relating to human purpose and ultimate reality.

he played with the idea that “outsourcing” had gone too far: moral questions had been outsourced to the market or the state, historical memory had been outsourced to computers, risk had been outsourced to financial instruments, and so on. The antidote, he suggested, was the rediscovery of a sense of common good, rooted in a deep, internalised knowledge of the past and feeling of obligation to future generations. Skillfully generalising the point, he mentioned that in Islam the word “jihad” could refer to an inner spiritual and moral struggle; and that post-Reformation Christianity, which influenced America’s founders, had stressed the need for an inner moral compass.

In accepting the Prize, Sacks concluded:

We owe it to our children and grandchildren not to throw away what once made the West great, and not for the sake of some idealized past, but for the sake of a demanding and deeply challenging future. If we do simply let it go, if we continue to forget that a free society is a moral achievement that depends on habits of responsibility and restraint, then what will come next… will be neither liberal nor democratic, and it will certainly not be free. We need to restate the moral and spiritual dimensions in the language of the twenty-first century, using the media of the twenty-first century, and in ways that are uniting rather than divisive.

In my language, I would call this “taking a stand” – taking a stand for the spiritual dimensions of what make us a community of thoughtful, compassionate and responsible people in the midst of many soul-less social systems that have arisen from dysfunctional traditions such as mass consumption or various forms of fundamentalism*.

Rabbi Sacks, 67, first gained attention by leading what many consider the revitalization of Britain’s Jewish community during his 22 years of service as Chief Rabbi, a feat he accomplished in the face of dwindling congregations and growing secularization across Europe. During his tenure he catalyzed a network of organizations that introduced a Jewish focus in areas including business, women’s issues and education, and urged British Jewry to turn outward to share the ethics of their faith with the broader community.

Central to Sack’s message is appreciation and respect of all faiths, with an emphasis that recognizing the values of each is the only path to effectively combat the global rise of violence and terrorism.

*see article on “Fundamentalism and the Ego”