Geography of the Mind: First Take 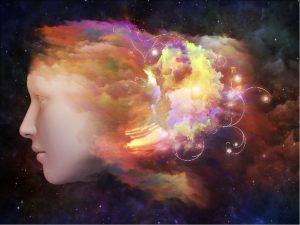 Where do we find the human mind? Most people think of the mind as synonymous with the brain and is, therefore, located in the head. Even theoretical physicist and bestselling author Michio Kaku does so in his NewYorkTimes bestseller The Future of the Mind.

But my personal experience is that the mind is far more than our brains. Our brains may serve as a biological central processor unit or “CPU” but consciousness lies in many dimensions.

As one example, our bodies consist of tens of trillion cells and these cells are constantly communicating with one another. They are not communicating in a language we might understand but they are letting one another know their needs; this biological system includes everything within our skin-encapsulated bodies.

The mind also exists outside our bodies. It shows up as fields that interact much like cells but are not limited to physical connection.

There are also skills exhibited by some animals that I think were once accessible to human beings. The two innate skills that come to mind are the elephants who headed for higher ground before the 2004 Indian Ocean tsunami and the videos of dogs at home who move to the front hall or foyer when their owners leave the office planning to come home; when the owner sees an old friend and decides to stop at the closest pub for a pint, the dog gets up and abandons its “welcome home spot.”

Is it so unreasonable to believe humans also had these innate powers but allowed them to wane as they evolved into more rational and reductionistic beings?

There are also abilities and powers manifested by some people that could be characterized as psychic – such as remote viewing, mediums and channeling, near death experiences, and telepathy. None of these activities rely on physical contact.

To summarize, the mind consists of our bodies and all the physical connections within them and the fields of energy outside our bodies with which we resonate.

I’m calling this short essay “first take” because I’d like to team up with an academic researcher to co-author a paper or even a book on this subject. Know anyone who might be interested?