Home » Mini-Keynote Editorials » 2021 » Personal Attitudes That Are Killing Us: A Look at How Popular Social Opinions Are Heading Us Toward Extinction
Email
Print

Recently I wrote an editorial asking if what we collectively think of as normal in our society might be killing us. This phenomenon continues to remain with me and I awoke the other day with a more specific slant on the matter. This led me to consider more precisely how we – as members of this global society – hold on to attitudes which result in actions or, in far greater numbers, failures to act that are contributing to the self-destruction of our species. 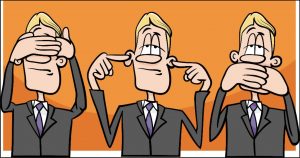 As I considered writing this piece my first concern was that any list of attitudes described wouldn’t be comprehensive enough. After all, I am not a social researcher. But I decided that any attitudes I could identify were worthwhile even if the list wasn’t comprehensive. So here are the seven “killer attitudes” that I came up with:

Killer Attitude #!: There are an infinite number of environmental resources that can support life on this planet. Attitude #1 is common among people who haven’t given much thought to climate change or other environmental disasters facing life as we know it. It certainly was the prevailing attitude most of humanity held until the late-19th century. Unfortunately, this attitude seems to be still going strong causing millions of people to remain silent while we get closer and closer to degrading the environment so it can no longer support human life.

Killer Attitude #2: People who are different than me are not my equal. Attitude #2 is at the root of racism, or any other form of rankism, where one is considered inferior or superior to another. War, genocide, and terrorism are some of the outcomes of this attitude.

Killer Attitude #3: There is nothing morally wrong with making as much money as I can, accumulating as much wealth as I can, and spending my wealth only on fulfilling my selfish desires, with no regard to helping others or making the world a better place.

Killer Attitude #4: The only priority of any profit-making corporation is to maximize profits to its shareholders.

Attitudes #3 and #4 are two of the core contributors to the so-called “market economy” remaining so unfair, causing the rich to continue getting richer while more and more people are being edged into the “have-nots” category. Attitude #4 is the mantra of the so-called market fundamentalists who proclaim loyalty to the free market yet take every opportunity to lobby and influence legislation to slant the playing field in their favor, so it is hardly truly free.

Killer Attitude #5: I know what I should be doing, but unless I am reelected I won’t be able to do anything; if I did the right thing I wouldn’t be reelected. Attitude #5 is the exclusive realm of politicians – be they local, regional, or national. In the U.S. most politicians have flipped their priorities from constituents first, party second, and reelection third to the opposite so their first priority is to get reelected.

Killer Attitude #7: My responsibility is solely to my immediate family. Attitude #7 is the most recent I have discovered. Not being a family man myself a friend shared with me how this attitude is quite widespread among people who work largely to support their families, not necessarily out of any altruistic sense of purpose or public service. A secondary aspect of this attitude is that it is usually devoid of any responsibility to the community as a whole since their self-imposed boundary of responsibility stops with the family unit.

Each of these attitudes can be found in many people and when amassed in our society they are major contributors to what is ailing us as a species, and will eventually kill us if allowed to fester.

As I mentioned at the start, I’m sure there are other “Killer Attitudes” that I have not included; I’d love to hear any from anyone who has any I may have missed here.