Home » Mini-Keynote Editorials » 2021 » Is Normal Killing Us? A look at the reality we have but never asked for.
Email
Print 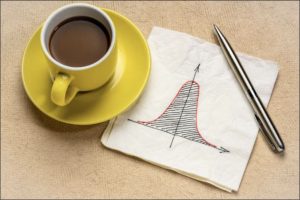 Most of us had some difficulty when we were growing up, largely around “fitting in.” It was an awkward time full of pretending we fit in even though deep down we were at worst scared or, at best, unsure of how to be in order to be accepted by society.

If we were well-parented, we had some coaching on how to behave and we probably picked up some additional pointers by observing friends and neighbors who seemed to get along with everyone. Thus we conformed. We shaped ourselves to fit in. If we were successful we could consider ourselves “normal” and behave like everyone else.

But this normal we learned to conform to was not our creation. We weren’t sure who created it but we did our best to fit into it so we could be normal. 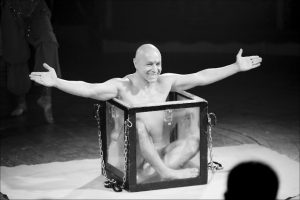 Like circus contortionists who routinely dislocate their joints to cram themselves into boxes (see photo left), we forced ourselves to squeeze into a way of living that seemed to be expected of us if we wanted to be accepted as normal. As a result of shaping ourselves to fit this reality and conforming to some unspoken set of standards of behavior, we most likely suppressed some parts of ourselves, parts that didn’t fit the normal we now belonged to.

In order to rediscover these suppressed parts of ourselves, some of us did psychotherapy or some other form of deep personal inquiry. Sadly, most of us didn’t take the time to heal from this traumatic experience. Many of those who did found this “buried treasure” to be a joyous discovery of previously hidden facets of their personalities – liberating unique gifts they had forgotten they possessed. One could call this buried treasure our “essential nature.” Once discovered we were left with the question “Why did we choose this reality?”

Once we have embarked on this self-discovery adventure we see that we have many things to “unlearn” – attitudes and behaviors we have taken on in order to fit in that can now be dropped. Then we can see what kind of reality we really want, what our essential nature sees as part of its future. Rather than adapting to some nebulous anonymously-authored reality, we can create our own script, our own story about what is our normal reality.

Take the normal everyone seems so eager to return to – the way things were before the COVID-19 pandemic hit in early 2020. That normal included widespread racism, environmental degradation, widening gap between the haves and have nots, impotent political systems, growing depression rates and self-medication trends, and, if that wasn’t enough, a pandemic that has killed over three million people worldwide in the past year as I write this.

It would appear that the normal that our society has evolved into and that we have conformed to, in some cases with great effort, is killing us. At a minimum it is making us very sick and could be threatening the extinction of the human species!

During a retreat in April 2020, a colleague and I had a conversation that speculated on whether the world was more ready for a reinvented society and ultimately a “new normal” now that the COVID-19 pandemic had caused so much global chaos and disruption. Would people now be more accepting of a new paradigm to explain how things could be rather than continuing to be resigned to an old paradigm that they never wanted in the first place? Might people now be more open to creating a personal reality they really want rather than enduring one they never authored in the first place?

A small group of us are working on bringing this idea into being. We have been serving as midwives for the birth of this new reality, redefining normal, creating what we want rather than continuing to force ourselves to conform to a normal that we never asked for.

Each of us needs to rediscover our essential natures and liberate the gifts we have suppressed in order to fit into the culture we were born into. Once we have a group of well-integrated souls we can start envisioning a new reality – a “renormaling” of our culture.