Home » Mini-Keynote Editorials » 2021 » Causing Our Own Suffering: Lessons from the Universe
Email
Print

In the last several years I have written about half a dozen article/editorials on how we cause our own suffering and I thought it was time for a fresh inquiry into the subject since it remains a persistent malady for most people.

You’ve heard the quote “Pain is inevitable; suffering is optional”? While it seems to fit a Buddhist philosophy it is not considered something said by the Buddha (according to fakebuddhaquotes.com). Some think its roots lie in 12 Step programs. Without clear attribution, I consider this wisdom to be a gift from the universe.

According to Psychology Today1, “The psychology of pain is the interpretation or meaning we give to that pain signal—the internal self-talk and beliefs about it which then drive our emotional reactions. Suffering results from mental and emotional responses to pain.”

The suffering comes from our thinking about whatever we find painful; it comes from our beliefs and opinions about whatever we think shouldn’t or should be. Or the story we tell ourselves about why something happened or what it means. This includes a wider variety than simple physical pain. These beliefs and opinions can be about social morays, politics, law enforcement, gun control, or any other subject that attracts strong opinions. 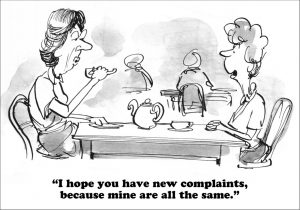 I’m defining “suffering” as any emotion or thought that interferes with one’s serenity or sense of well-being. It could show up as a thought that won’t go away, like an obsessive preoccupation with some notion. Another sign of suffering shows up as complaining to others about something that you think should be different that it is. Many people who do this are seeking agreement that their views or opinions are “correct,” or that people agree with them.

There is what happened – the accidental injury, the divorce, the loss of one’s home due to a natural disaster – and then there’s the story we tell ourselves about what happened. The story is our creation. What happened caused the pain; the story adds the suffering. And the suffering continues as long as we stick to that story!

During the Trump administration I endured my liberal friends’ stories about horrors going on in Washington. It was clear to me that they were suffering and I would excuse myself from the conversations. Many of my friends took this to mean I didn’t want to talk about politics. But they weren’t talking about politics; they were talking about how wrong Trump was. I eventually realized my aversion to listening to their stories was not about politics; it was the righteousness with which they told their stories!

When one resorts to self-righteousness one is indulging in negative ego, the darker side of ego, and that was what I was feeling an allergic reaction to.

One of my teachers – Chris Davis – has helped me see that staying grounded in the nondual while fully living in the dualistic world is a great formula for living a life free of suffering (see “Nondualism as a Re-Framing of Perspective”).

Davis hosts monthly conference calls that serve as reminders for me since I have many years of practice in telling myself stories that have added to my suffering. I have incorporated these calls with Davis into my spiritual practice to break the habits of the past and largely liberate myself from this unnecessary suffering.

Back to the popular quote with which I started this article – “Pain Is Inevitable; Suffering Is Optional” – I find there is so much practical wisdom in it. But this wisdom is not being widely applied to end human suffering. Why? I have no idea.

It is so obvious and easily accessible. Could people prefer holding onto their righteous beliefs and opinions despite the suffering they endure as a result? If so, it seems like a high price to pay.