Home » Mini-Keynote Editorials » 2020 » Loving Thy Enemies: The Challenge for Our Time
Email
Print 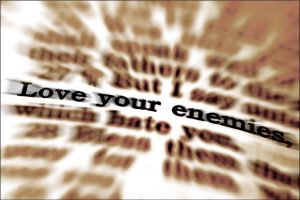 Loving our enemies is no longer merely a nice idea advocated by Jesus Christ and other spiritual prophets throughout history. It no longer fits exclusively into Sunday School classes, catechism studies, or theology discussions.

Loving our enemies has become a requisite for our survival. Hate is killing us. Division and separation is destroying our global civilization. If we maintain this course of widening the divides we are likely to find ourselves in the company of the dinosaurs.

First, let me define enemy. I’m defining enemy as anyone who I think is persecuting me, my ideals, or my loved ones. This could include a politician, a co-worker, a neighbor, or another driver on the highway. It need not be someone in a uniform, carrying a weapon, or someone physically threatening me.

One measure of an enemy might be to consider loving them and notice how your body responds. If the idea repulses you then you might be holding them as an enemy. After all, it is much easier to love someone who seems more lovable, like cute babies, kittens, puppies, or family members.

Recently I learned about a black musician named Daryl Davis who befriended several Ku Klux Klan (“KKK”) leaders back in the 1980s who have subsequently denounced the organization. Davis wrote a book on the subject almost 50 years later and gave a TED Talk telling his compelling story.

In another example, Arno Michaelis, an ex-neo-Nazi, and Pardeep Singh Kaleka, whose father was murdered by a white supremacist, came together after the 2012 Sikh temple shooting in a Milwaukee suburb that left Kaleka fatherless. The gunman who killed Kaleka’s dad and five others was a member of the white power group founded by Michaelis years earlier. Arno has since left the organization and later became a Buddhist. How Michaelis and Kaleka met and began working together to spread their anti-hate message is the subject of their book, The Gift of Our Wounds.

Recently, a small group of colleagues and friends were having a dialogue on the power of love and an idea caught hold amongst them to advocate weekly contemplations or meditations where people could send loving thoughts to the world, whether for ten minutes or one hour, at the same time each week, wherever they were located.

They call it the Love Hour and published an informational website where anyone interested can see how simple it is to do. There’s nothing to join. No harvesting of your data. No leaders running things. Just review the simple website and decide to join us or not. From 4:00PM – 5:00PM, every Sunday afternoon, wherever you are in the world.

Consider learning just how simple it is to do and start sending love to everyone in the world, even those people you might find difficult to love. Meet this challenge of our time, a time when we seem more divided and mistrusting of one another than ever before.

Love thy enemy and help heal your world.