Appreciating Context: The Secret To Lasting Change (Part I)

Coming to Toronto February 1
I’m speaking at the HRPAO annual conference in Toronto (January 31- February 2), the second largest gathering of HR professionals in the world according to the organizers; my talk is entitled “Breathing Consciousness Into Your Organization” and I will be doing book signings after my talk; if any of my Canadian subscribers will be there, be sure to look me up and say “hello;” see this link for more.

My “Office” at Global Dialogue Center
Thanks to Debbe Kennedy, the founder, I now have a page of my own on the website for Global Dialogue Center which includes the interview she did with me in 2006 and the two dialogues in which I was a participant – one with Berrett-Koehler authors and another with a group of keynote speakers from the CSR/SRI conference in Zurich; since Debbe and I are planning to do more work together, more content will be forthcoming; you might want to check it out as well as take a tour of the entire Global Dialogue Center website.

Last time I saw a statistic, around 85% of those who authorized the billions of dollars spent on change programs each year in U.S. corporations were dissatisfied with the outcomes! So why do organizations and people in them continue trying the latest fad for making improvements when there is such a high dissatisfaction rate? Doesn’t this seem odd? Perhaps even “insane” (trying the same thing over and over expecting different results)?

To make matters worse, to rationalize or explain the failure we frequently blame it on the people, thus demoralizing the workforce. Usually, however, the people are committed, talented and smart. But the system won’t allow them to change it because they are leaving the context alone while trying to change the form and content within it. This is like nursing infected goldfish back to health and putting them back in the same tank of dirty water that caused them to get sick in the first place. Then blaming the fish for getting sick again!

There is amazing leverage in making large scale and lasting change happen that comes from shifts in context (see Archimedes illustration below). But to achieve changes in context one must appreciate and have some understanding of what it is. 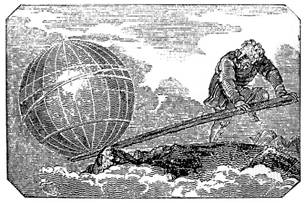 Professor Mel Toomey, teacher of the Master of Arts in Organizational Leadership (MAOL) program at the Center for Leadership Studies, expands on the subject of context. He teaches that context gives meaning to the work done within the organization. He states, “A consciously generated context is one that goes beyond the preexisting, oft unexamined, context. It is a step or two out of bounds. When developed properly, it does not threaten the existing context. In fact, the new context will honor it, appreciate and validate it, and then move beyond it with the recognition that moving beyond would only be possible because of what has gone before.”

Toomey continues, “When we include the preexisting context inside of the new context, it has the effect of empowering all that it has taken to get our organization to its current state. A well-designed, generated context helps those who work in our organization understand why they are doing something and to see the difference they make. When we examine context in the foreground of organization with the same attention we might give operations, manufacturing or distribution, we begin to see the implications of treating it as the soft stuff. The idea that context …is the ‘soft stuff’ has got to rank among the top ten most uninformed views about organization. If [contexts] are so soft, why do organizations have such a devil of a time making changes around them?”

Let’s look at this.

Based on past practices, managers and leaders seem to prefer “new and improved” content – better processes, a new model, different programs, policies and other bits of content which typically result in incremental improvements at best and, at worst, temporary improvement which typically finds things returning to the status quo after a short time. They seem to want simple steps they can implement immediately, see some difference and then get back to what they know. Even those who fancy themselves as “change agents” seem to prefer focusing on the content which is easier to talk about, understand and obtain support for.

Consultants who feed this voracious appetite for “models du jour” make lots of money. The people who hire them feel comfortable in approving budgets because working on content is generally acceptable, even traditional. It is the accepted practice. The corporate appetite for seemingly endless tools for changing or improving organizations is very apparent if you look at the number of business books published each year by consultants or academics championing some new method of improvement. The concepts of Learning Organizations, TQM, Six Sigma, Reinvention, Employee Engagement, Participative Management are just a few. However, many organizations become even more dysfunctional after implementing some of these changes because their “immune system,” which tends to resists change, becomes more resistant to future change attempts. From a systems thinking perspective, we know the system sees most attempts to change it as threats. When there are repeated attempts to change by focusing on content alone, the system can actually develop greater muscle to fight off future efforts.

Continuing to focus on content – what many would call the “pragmatic” – often yields small changes, sometimes prevailing but usually not. This lies at the heart of so much disillusionment on the part of seasoned organization development people, internal and external. It is also disheartening for all the people within the organization who are enrolled in change program after change program, enduring the extra energy drain required to implement each new model or process du jour.

If lasting meaningful change in organizations most frequently occurs from a shift in the context, why do people label it too abstract and not pragmatic? Or, the “soft stuff” as Toomey called it? Why do so many people say they find it too abstract and avoid engaging it because there are seemingly “higher priorities”? Don’t they realize that most of the things with higher priority are the result of dysfunction in the organization, and that usually comes from an outmoded or ambiguous context? At the risk of overusing the metaphor, this is like rushing around rearranging the deckchairs on the Titanic. There is a larger issue at hand!

This “much ado about nothing” reminds me of the fad diet phenomenon in America. People keep buying diet books and trying different programs but eventually end up where they started. In many cases they actually end up at a higher weight! The latest diet serves as small talk fodder and fills those awkward pauses at cocktail parties but unless the person shifts the context of their relationship with food and exercise they are simply making money for the ever-growing numbers of authors and vendors of these programs. Again, why do we do this?

Many people seeking to change their organizations keep choosing the familiar, even if it doesn’t work, because it seems rational. It is graspable to the mind in some sort of perverse way, and requires a minimum of new learning. In other words, they know how to wrestle with the pragmatics – the “deck chairs.” The larger matter, the culture of the system with all its complexities, is unfamiliar territory and they’d rather stick with what they know.

Some theorists have proposed people don’t really want change to happen because they have an investment in keeping things as they are. Then they don’t have to learn something new or grow and stretch. These theories address the darker side of people who are unwilling to risk their comfort with the familiar, even if it means the company suffers.

Here are a few reasons people use for dealing with the more familiar content:

Here is some of the rationale for avoiding the less familiar context:

Given this comparison, why should people advocate a focus on context instead of content? One answer: it is the most likely approach for sustained meaningful change, even organization-wide transformation. While there might be greater personal reputation risk, more new things to be learned, a larger time requirement, a lack of guarantees and the possibility of it being a “harder sell” to management, the leverage is enormous!

Next month I’ll make my case for working with context and getting results as well as offering a few examples.

[end of Part I: continued next month]

* Looking for more quotes? I have acquired a long list of quotes which I have found inspiring. You can view them at Quotations

Search for Common Ground: Founded in 1982 by John Marks, works to transform the way the world deals with conflict – away from adversarial approaches and towards collaborative problem solving; its global projects and initiatives deal with cross-border and cultural conflict issues.