A Tale of Two Paradigms

International Spirit at Work Awards
It was great fun to play host for the 2006 International Spirit at Work Awards in New York; not exactly a Billy Crystal moment but exciting; I did a short talk about Willis Harman, the late visionary who inspired the awards, and co-presented the awards with Judi Neal, founder of the Association for Spirit at Work, to the four organizations selected – one from Australia, one from Germany, one from India and one from the U.S. The awards ceremony kicked off a delightful three-day combination retreat and conference.

Welcome New Subscribers!
November saw the largest increase in new subscribers for FutureShapers Monthly in its eight and a half year history. Welcome to all the new readers! I welcome your comments and feedback.

Foresight Journal Publishes My Article on Humanizing Work
Visitors to my articles page of my website will notice a recent addition, a link to an article on “Humanizing Work” I was asked to write for foresight, the bi-monthly journal on the future published out of the UK.
*********************
2. DECEMBER EDITORIAL

Once upon a time there was an aging paradigm. For many years everybody loved it and found it incredibly useful. They took it for granted. Generation after generation passed down advice and traditions on how best to live within the paradigm they had all come to cherish. They were able to function well. Things made sense. Civilization went well. Order prevailed. It was familiar, comfortable and served people well, like an old pair of shoes. This remarkable paradigm helped society transition through the Industrial Age into the Information Age, a remarkable time in modern human evolution.

Then, the aging paradigm started to stumble. At first it was just once. Then it happened again, and again. Soon it is stumbling around all the time and people start to notice. More and more things don’t make any sense. But most people simply defer to their faithful worldview and make a few adjustments to their coping mechanisms. They shift their lifestyles some and make changes in their thinking processes to accommodate the aging paradigm. Some start offering techniques to help the paradigm remain viable, to maintain its pertinence, magic potions of all sorts. After all, they only know one worldview! It is the only one they have! As it continues to unravel, panic begins to set in! Desperation drives some people’s actions who are trying to do “the best they can” and coping with the only worldview they know. 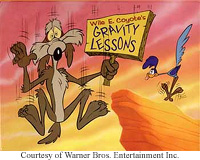 PANIC!…caught between paradigms can be like stepping off a cliff
…like “Wile E. Coyote” here from The Roadrunner Show

Meanwhile, another paradigm is emerging. It is different from the old worldview, comprised of principles more consistent with the challenges of daily living in the modern world. This new worldview contains all the wisdom of the old paradigm but with additional traits that allow better functioning in the world. It possesses the potential to support a conscious evolution for humankind, to intentionally evolve to a new level of human maturity, responsibility and consciousness. These possibilities have been missing in the old paradigm.

While this new paradigm is barely conceived, a few people who have been looking for a better way notice its pending arrival and begin preparing for its debut. They recognize how the old worldview has been faltering and realize its days are numbered. Perhaps because they are looking for something new, they are there to welcome its emergence. In contrast to their brothers and sisters who are hard at work shoring up the old paradigm so it might be more useful and credible a bit longer, these visionaries focus their energies on mid-wifing the birth of this new worldview.

The young visionaries realize they have been acting from the assumptions of the old worldview by making the old paradigm “wrong” in order to make the new one “right.” They realize they are guilty of paradigm straddling and start changing their attitudes. They soon realize the old paradigm needs hospice care like a dying family member while they are mid-wives to the emerging new one. They begin supporting both processes without forcing either.

What is a paradigm (“pair a dime”)? Wikipedia says, “Since the late 1960s, the word paradigm has referred to a thought pattern in any scientific discipline or other epistemological context.” Dr. Michael Ray, Stanford Business School academic who is an international expert on the subject, calls it “the fundamental assumptions about the nature of the world.” I define paradigm as a worldview or set of assumptions, beliefs, principles, traditions and taboos that allow us to understand and function in the reality in which we live. It could also be described as the story we tell ourselves about who we are and how we relate to life. – JR

When an old paradigm is losing credibility and a new one hasn’t yet gained widespread acceptance, the times can be very challenging. Watching the collapse of the familiar and previously reliable worldview as it loses favor and efficacy can be both sad and scary, especially when one doesn’t see any alternative! After all, society has relied on this system of traditions, beliefs, principles, assumptions and taboos for generations, even centuries. What else does society know?

Some well-intended people may make an effort to shore up the old paradigm, like repairing a sinking ship, hoping they can salvage enough usefulness for them to remain loyal in the absence of anything to replace it. From their point of view, there are no options! They don’t even know they are operating within a paradigm. It is simply the world they live in, like water to the goldfish. They are loyal to the old paradigm. After all, it worked for them all their lives and their families before them and, perhaps, farther back into history. Of course, they’d remain loyal and stand by their friend, the worldview they have relied on through the years. It never let them down before! It deserves a chance to redeem itself. These loyalists will work like crazy to keep it functional, like a medical team keeping the patient alive as long as they can.

“What choices do we have?” they will tell you. Ignorance of an alternative paradigm can be quite stifling, and “making the most of it” becomes a way of life. So people scurry about looking for new tools and methodologies, new techniques and models, that may shore up the existing paradigm, in near-desperate attempts to keep it functional and pertinent. But, alas, these are only temporary consolations as they find their quest is an unrequited pursuit of better ways to cope with their cherished worldview.

Others may have a vision, revelation or intuition of an emerging paradigm but they cannot yet demonstrate its qualifications as a replacement, its credentials as a worthy successor. After all, the new paradigm has no track record. It has yet to establish any traditions or taboos. Some principles may have started revealing themselves, causing a few visionaries to start developing some beliefs and make some assumptions about the “mystery guest.”

Since a paradigm requires consensus for it to become a society’s operating worldview, this new paradigm may be initially greeted with much skepticism, distain and even hostility from people who are loyal to the old paradigm. Those who have mastered living and working in the old paradigm may resist all thoughts of changing their worldview. After all, they have learned the keys to success in this world and don’t want to risk losing what they’ve gained. They are benefiting so well from things remaining the same they may even get hostile when it is suggested the paradigm could be changing. These people are usually a minority and often are the socially elite.

These are the people who aren’t familiar with reframing their thinking – learning to think from different underlying assumptions and beliefs. “How can you turn your back on our trusty, dependable worldview after all it has meant to us?” they shout at the visionaries, accusing them of being ingrates, turning their backs on the familiar and comfortable – the only worldview they have ever known!

The visionaries try to explain they have no ill will against the old paradigm. They try to tell the loyalists that the old worldview has had its day and a more functional one is trying to be born but cannot emerge if there is no acceptance, no welcoming.

Like trying to breed healthy fish in an aquarium filled with diseased water, we can nurse the sick fish back to health time after time but as long as they are returned to the infected water their good health will be temporary. The old worldview which might include such outmoded beliefs like: 1. we are separate beings without any connection except for blood relations or family, 2. to win others need to lose, 3. love is a rare exception in a malevolent world and 4. Nature is ours to dominate. Mystics have been telling us this for centuries and now our beloved science is confirming we are all connected in a very real way.

Living and working with an outmoded paradigm-worldview is like trying to drive your car with the rear view mirror.

The paradigm waiting to be accepted is more aligned with our new science which shows us 1. we are interconnected, 2. our world is fragile and can only handle so much abuse, 3. we either start acting like crewmembers on Spaceship Earth or we perish and 4. we can consciously evolve for perhaps the first time in human history.

The gap between the dying older paradigm and the birth of the new is the reality we experience today. This chasm can cause great upset and angst among those who cannot imagine a “new and improved” worldview emerging, those who only know their familiar paradigm is losing it and have no idea that something better awaits them. This news may help them be less anxious, less afraid and, perhaps, more accepting of the new worldview that’s trying to emerge.

How will the eventual shift complete itself? My best guess is it will happen when there is enough acceptance for the death of the old and enough desire for the birth of something new. This is a question of collective will, it seems to me. Unlike the century or two it took for people to give up the idea the world was flat, there is some urgency in this paradigm shift becoming complete. The consequence of not changing one’s mind about the Earth being flat in the 19th Century wasn’t particularly costly for anyone else. Refusing to think differently now, like Einstein recommended all those years ago, could be very costly for all of humanity.

The baby is waiting to be born. Can we accept it, nurture it into acceptance and help it to maturity?

KEYNOTES THAT MAKE YOU THINK!