Pushing the Envelope of Transformation

Recently I participated in a program hosted by The Presidio Dialogues, who’e theme was “Twelve Steps to Sanity.” In conjunction with that program I authored a 1,500 word article with the same title. If you are a subscriber to this newsletter and would like a copy, send me an email at john@renesch.com and put “Sanity article” in the subject line and I’ll send it to you by reply email as an attachment.

Free Teleseminar on Conscious Leadership: May 17
I’m being interviewed for a free teleseminar on May 17 by leadership coach and organization consultant Art Giser who is making this available to my subscribers at no cost; it will be one-hour long and begin at 6 PM Pacific Time; the title is “The Art of Conscious Leadership: Becoming More Effective, Inspiring and Authentic While Having More Fun and Being More Yourself at Work;” free audio files will also be available for anyone who cannot make the call; to sign up, go to www.AskJohnRenesch.com.

Link to Rabbin Article
Early in April, my pal Rob Rabbin sent out a great essay – “For Entertainment Purpose Only;” it strikes a resonate chord within me and I think you might enjoy it and be inspired.

The other day I met with a corporate consultant who was from another country and recently migrated to the U.S. During our conversation I used what I thought was a common expression, “push the envelope,” as a synonym for radical advocacy for change. She asked me to elaborate on what I meant by this term.

I thought the expression was born from aviation but I wasn’t completely sure. After our meeting, I confirmed the expression was popularized by the 1979 movie “The Right Stuff.” It originated as the Jet Age was maturing and airspeed was approaching the speed of sound, called “Mach 1.” Aviators and engineers anticipated what would happen as the mysterious “sound barrier” was exceeded. The idea of this being a “barrier” was actually coined by a news reporter and was not seen as an actual impediment by those in the aeronautics industry. 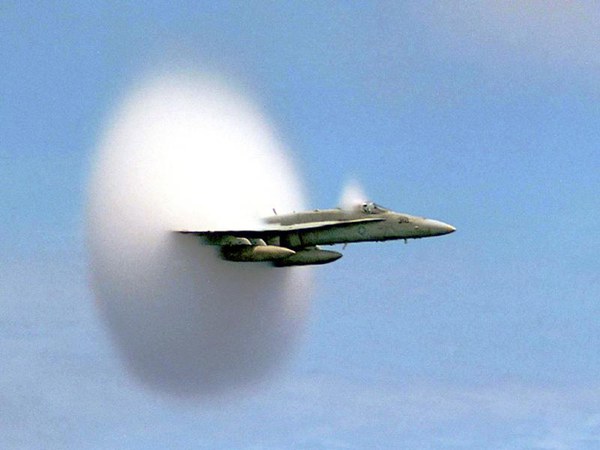 There were theories about what might happen when the speed of sound was reached or exceeded but it was largely unknown until it finally happened and the “sonic boom” was first experienced. It could be safe to assume that relatively few humans except those aeronautically sophisticated people who were comfortable with a supersonic reality were even aware of this mysterious barrier.

In many ways I see the sonic boom as a metaphor for the social transformation “barrier,” the point at which the paradigm shifts from a culture based in fear and separation to one of connection and compassion or love, from a worldview of individuality and short-term gratifications to one based on relationship and long-term sustainability for everyone.

In the 1940s when aircraft were flying at subsonic speeds, transonic or supersonic speed was a mystery, even feared. This is much like the social transformation we are evolving toward today. The mystery of how to be, how to live and work in this kind of new world, what Eckhart Tolle’ calls “the new earth,” triggers fear for many who prefer to cling to the current familiar yet restrictive reality. Rather than welcoming the unfamiliar but potentially liberating lives that await them, they resist. So, like the society teetering at the edge of breaking the sound barrier in the 1940s, we are now perched on the brink of a paradigm shift, what Willis Harman calls a “global mind change.”

Aircraft flying at supersonic speeds need to be designed differently, much like people will need to think differently in the post-transformation, new paradigm world. A fluid mechanics professor describes it: “The overall aircraft design certainly needs to be modified to account for the physics of transonic flow.” Similarly, once the context of a society shifts everything within the culture (the content) is subject to change in order to serve the new context. Structures that support the stability of the old paradigm will need to adapt to being supportive of the new paradigm, much like supersonic aircraft were required to be built differently than subsonic aircraft.

Albert Einstein wrote over fifty years ago that we won’t solve our problems with the same consciousness with which we created them. We need a “new consciousness,” he told us.

Fear is keeping us in sub-transformation reality – locked in the “old consciousness.” Faith or trust in something greater than our existing thinking will allow us to transcend and experience the shift. Marianne Williamson says our deepest fears are not about our inadequacies but rather we fear that we are “powerful beyond measure” – a thought that has inspired millions of her readers.

There’s a line from a Josh Groban song I first heard in a Cirque De Soleil show in San Francisco some years ago. The song is “Let Me Fall” and the line is

Someone I am
Is waiting for my courage
The one I want
The one I will become
Will catch me.

This courage to be willing to be uncertain, trusting we are becoming more than who we think we are now, is what is so sorely needed at this time. This kind of courage is spiritual. It allows us to trust that the ones we are becoming will catch us.

Pushing the envelope of transformation requires us to change our minds, change the way we think, and to muster the courage to trust the people we are becoming, those who will catch us if we allow ourselves to shift to an unknown, unfamiliar paradigm, to embrace this new consciousness and enjoy a new earth. All of this is possible.

Like the aeronautical engineers of the 1940s who possessed the certainty that supersonic travel was neither mysterious nor threatening, I know this new paradigm is the world we dream about. So do many others. Like our fears about supersonic flight more than half a century ago, fears about the new paradigm are more about its unfamiliarity than anything else. I call on those among us who see the possibility of a new earth and are not shackled by fear of the unknown to join me and others in becoming radical “evolutionaries,” strong advocates of a new consciousness and champions of a new reality.

“economie 06,” a two-day conference in Zurich, October 9 & 10, 2006, dedicated to Socially Responsible Investing (SRI) and Corporate Social Responsibility (CSR) for professionals advisors, investors, students and executives; John will be one of the keynote speakers.

John is a San Francisco writer and businessman-futurist. His latest book is Getting to the Better Future: A Matter of Conscious Choosing (see www.GettingToTheBetterFuture.com). More about John can be found at About.