Looking back on the most recent part of my career, say, the last thirty or forty years, it occurred to me that I made a living by being willing to say and write things that went against the grain for most people. I see how I was willing to be unreasonable and even appear foolish to many of my friends, family, and certainly, most of my audiences and readers.

In the 1980s I decided that the existing paradigm of thought was outmoded and that we could be in for a very bumpy ride going forward. I chose to make my work about doing all I could to make this global transition as smooth as possible. This meant speaking against convention, poking a stick in the eye of status quo, and challenging many of the mental models of the day. All of this would require that I be willing to look foolish, to be dismissed, and considered, by some, to be crazy.

My kid brother told me he had no idea of what I did, implying it was beyond his capacity to understand. He was quite intelligent, so I took his comment to mean he thought I was sort of nuts. 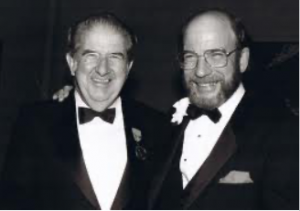 John at Tribute to Willis circa 1990

My mentor Willis Harman (pictured with me on the right) talked about “global mind change” – a huge task for which I signed on as crew. In the early years I found many colleagues spread around the world and, gradually, most of my friends were talking and writing about similar needs for change or transformation.

You could say that I hung out with other “crazies” who were willing to look as foolish as I was. When I was active in the World Future Society in the 1990s, the vast majority of the futurists attending our conferences were status quo-ers. Of the two thousand or so attendees at one of our conferences I could relate only to a relative handful who saw the need to jump off the existing paradigm of thought and help to create a new paradigm that would allow the human race to have a healthy relationship with one another and our planet.

One reason so many of them remained loyal to the status quo and the paradigm of convention is that they were affiliated with government, large corporations, or universities. So they may have felt obliged to stick to the party line so-to-speak and not stray too far outside the lines of convention. As a self-employed independent, I did not have that restriction. I felt no pressure to be loyal to an employer or benefactor; my loyalty was and continues to be to the human race.

The downside of not having an employer or institutional affiliation is that I was always on my own financially as well, making things particularly challenging at times. Believe me, there were times when I envied colleagues who were getting regular paychecks. The royalties and speaking fees they received were extra while they were my bread and butter. 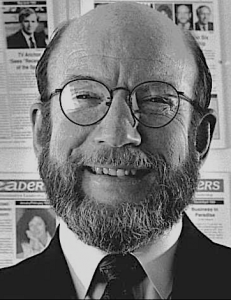 In 1990, I started New Leaders Press largely to connect people who were starting to see that global mind change was a possibility. We published The New Leaders newsletter, a bi-monthly, subscriber-based hardcopy publication. One of my main motives in doing this was to let readers know they weren’t alone, that there were other people in mainstream business who has similar values and motivations – that they had company!

So after all these years, how far have we come? The good news is that there are far more people today who appear to be conscious and aligned with the kind of transformation needed in our world. The bad news is that the outmoded paradigm of thought is still very much entrenched, suggesting that when the shift to the new paradigm does happen it will not be soft. It is more likely to be a very hard landing as much as I had wanted to soften it.

As my collective intelligence colleague Tom Atlee is fond of saying, “I’ve come to believe that things are getting better and better and worse and worse, faster and faster, simultaneously.”