In a conversation the other day one person shared how she had experienced an “ego flare” when a friend said something that she interpreted as a criticism of her self-image as a supportive, helpful person. She explained that her reaction was disproportionate to the comment – beyond her usual calm demeanor. This prompted me to comment, “Sounds like you had one of your sacred cows gored.”

While this prompted some good-natured chuckles, I was surprised that the colloquialism of “goring the sacred cow” wasn’t as widely known as I had thought. 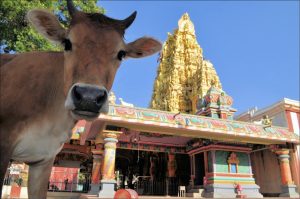 According to Wikipedia, a sacred cow is an idiom “based on the popular understanding of the elevated place of cows in Hinduism and appears to have emerged in America in the late 19th century. A literal sacred cow or sacred bull is an actual cow or bull that is treated with sincere respect. A figurative sacred cow is a figure of speech for something considered immune from question or criticism, especially unreasonably so.”

While Hindus venerate their cows and protect them as sacred, the idiom has come to mean “someone or something that has been accepted or respected for a long time and that people are afraid or unwilling to criticize or question” according to Merriam-Webster.

As an example, a recent article* in The New Republic cited “Filling the nation’s courts with conservative justices is a unifying principle for the Republican Party and appears to be the one sacred cow that even Trump won’t slaughter.”

On a personal note, many of us have “sacred cows” – values, beliefs, self-images or identities – that we hold as off-limits to criticism. These are creations to which we have become emotionally attached, identities that can mask who we are at our essence, our Unique Selves. These ego-created identities are artificial. When they are challenged, or even seemingly criticized as my friend reported, we can become triggered and have our own “ego flare.”

Say you consider yourself to be an impeccably honest person. This value and identity is very important in how you behave and interact with the world.  Now, imagine that someone infers that you have done something unethical (cheating at cards, in a business transaction or simply told a lie). Imagine your reaction – how “insulted” you might be that this person accused you of these actions which are completely in violation of your self-image as an impeccably honest person.

These self-made identities can also include seeing ourselves as supportive and generous people, such as the woman I referenced above, or seeing ourselves as intelligent, or tough, or a Republican or a Democrat. If we hold on to any of our self-created values, beliefs and identities, and are emotionally attached to them, we are subject to ego flare-ups and we will likely react impulsively rather than respond thoughtfully.

A former teacher of mine told me years ago how easily we can get “hooked” or triggered by situations that challenge our attachments such as these self-identities. If we can maintain a level of equanimity related to these attachments we can minimize our susceptibility to getting hooked.

As my friend did in the conversation, one solution is to recognize this impulsivity when it happens and minimize the degree of reaction or damage you may do by a defensive reaction. It might even save a relationship. It can also serve you to examine your attachment and the degree of identity you have assigned it.

And remember, your sacred cows are still just cows. You are the one who made them sacred. While they may be who you think you are, they are not who you really are.