During a recent interview I was asked which of the various crises facing our species was the most critical or important. My answer surprised my questioner, who was expecting something along the lines of environmental threats, climate change, radicalism or terrorism. “It all boils down to a crisis in leadership,” I opined. There was a brief silence as both of us let my answer settle in. My mouth often says things that I haven’t thought about before so I’m used to saying things on occasion which I haven’t thought through ahead of time. I reflected on my unedited response for a few seconds during the lull and felt comfortable with it.

Finally, the interviewer asked me to elaborate on my response. This is the gist of what I told her:

The biggest global crisis – the greatest threat to the future of life on Earth as we know it – is a lack of competent leadership. It seems to me that every crisis we face has one thing in common – a failure of those in charge to effectively lead the way toward a sustainable resolution of that particular danger or threat.

What are the biggest conundrums facing these less-than-competent leaders? I see two primary challenges. First, we’ve created social systems far more complex and powerful than our ability to manage them. Secondly, our leaders lack confidence, nerve and competency to make bold enlightened moves to assume control over these complex social systems.

I believe in offering potential solutions if one is pointing out problems, so here are my best shots:

Challenge #1: Leaders can learn how to intervene in complex social systems in such a way that the systems become more functional and responsive to conscious leadership. This competency can be learned. It requires learning how to think differently but it can be learned. We need to learn how our complex “franken-systems” operate, develop their own cultures and, without heightened human awareness, can begin to run the show.

More than twenty years ago, W. Edwards Deming (left), father of the quality movement in the 1980s, estimated that 94% of all mistakes come from the system and processes… only 6% from the people. If we don’t understand how systems behave and misbehave we are doomed to be at their whim forever!

Leaders, and I mean all of us here, not just appointed or elected people in positions of leadership, need to learn about paradigms of thought since changing them is the job at hand – to shift the paradigm of our culture to one that is more functional and more compatible with the reality we claim to want in this world. We need to learn how they form, how they change and how to shape new paradigms that support the desired vision for the future. 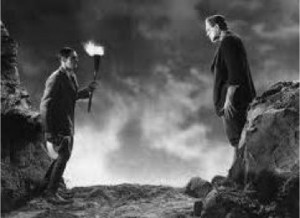 From the 1931 movie, Dr. Frankenstein confronts his creature

So the good news on this challenge is that we can learn how to more effectively manage our “creatures” – our franken-systems. This is learnable if we have the will to do it.

Challenge #2: Complementing competency and skills to lead effectively there also needs to be a transformation of the leader’s consciousness that not only empowers them in bringing about the paradigm shift but sustains them in a continuing state of mindfulness and self-awareness. This is not something to be merely learned as in resolving Challenge #1. This requires an ongoing committed practice that allows the leader to monitor their state of consciousness so he or she doesn’t fall back into their old patterns of thinking and acting – that entranced state of consciousness with which they are very familiar.

To sustain this level of conscious leadership requires constant self-examination, exceptional levels of ego management and ongoing support in maintaining these levels of personal consciousness. Elements of this ongoing support need to include an organizational culture that allows for itself to be transformed plus peer-to-peer support and personal coaching for the leader on a regular basis.