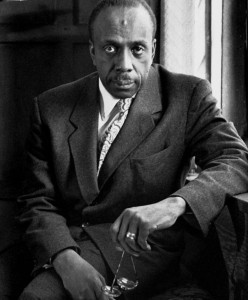 [February was Black History Month here in the U.S. and one of my favorite African-American heroes is not particularly well-known so I revived this posting from the Global Dialogue Center a few years back.]

Not everyone will have heard of Howard Thurman but he has had much positive influence in the world, especially in the United States. After his 1935 meeting with Gandhi in India, he brought Gandhi’s message of nonviolence to the U.S. In my view, one of his most meaningful legacies was his mentoring Martin Luther King, Jr. on the subject of nonviolent social change.

Thurman was a former classmate of Martin Luther King, Sr and so paid close attention to the young King while he was in graduate school, ultimately becoming his spiritual advisor. It is said that wherever King would travel he would always have a copy of a Thurman book with him. In fact, some believe Thurman was the pastoral leader of the civil rights movement. So who is this man who is possibly one of the least-appreciated visionaries of our time when it comes to social change?

So who is this man who is possibly one of the least-appreciated thought leaders and visionaries of our time when it comes to social change?

Born in Florida and raised in the segregated South, Thurman graduated from Morehouse College as valedictorian in 1923 and was ordained as a Baptist minister in 1925. He served as a church pastor and as an academic, equally comfortable in either the classroom or the sanctuary. He also travelled broadly, which included his trip to India to spend time with Gandhi.  In 1944, in the midst of high racial tensions due to a rapid increase in the African American population in San Francisco Bay Area shipyards during World War II, Thurman left his tenured position at Howard University and co-founded The Church for the Fellowship for All Peoples in San Francisco. It was the first interracial, intercultural church to be established in the United States.

In 1958, Thurman was invited to Boston University (BU) where he became the first black dean of Marsh Chapel and a faculty member of the university. While tenured at BU he continued his pastoral duties in San Francisco, where he died in 1981. During his lifetime Thurman had authored 20 books.

Another of his legacies is The Howard Thurman Center for Common Ground, located on the campus of Boston University. The Center was founded by Dean Emeritus George K. Makechnie in 1986 “to preserve and share the many legacies of Dr. Thurman, who spent his life working to break barriers of divisiveness that separate people based on race, culture, religion, ethnicity, gender, and sexual identity.”

To close, I’d like to share a quote by Thurman. It was my original introduction to the man and has become one of my favorites: