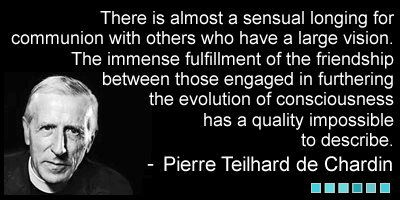 I saw the above quote by Jesuit philosopher Pierre Teilhard de Chardin for the first time the other day and it struck me quite profoundly. This incredible visionary captured the sense of longing I have felt for decades and managed to express it in words I never would have used.

As I have expressed many times recently, I am finding two or three new colleagues in this work every week for the past several months which I find very exciting! I hadn’t realized this excitement might be due to the “sensual longing for communion” that de Chardin wrote about so eloquently. For decades I have been part of a relatively small cadre of people writing and speaking about a global transformation, a new paradigm, and many of these people are regular readers of this newsletter. For decades I have considered you folks to be my tribe – people with whom I shared this “large vision.”

But this tribe hadn’t seemed to be growing much over the decades. The people in it just continued to grow older. There didn’t seem to be much new blood entering our tribe.

Then, as little as three years ago, I started seeing and meeting more and more new faces – people who seemed to share the vision. Was the tribe starting to grow? I began reaching out to people as they came to my attention. A few might be considered “wannabes” – people with great intentions but little evidence that they are doing much. But the bulk of the people I spoke with seemed to be “the real deal” –  individuals who not only talked like they were “engaged in furthering the evolution of consciousness” but were walking their talk and being diligent in their actions.

Getting to know these people, “new” people from my perspective, has been a joy. Getting to know them has been a true pleasure. But until I saw this de Chardin quote I hadn’t realized these people were filling a “sensual longing for communion” for me. Clearly my sense of longing was less than fully conscious. I had grown accustomed to being part of a “global guild” so-to-speak and gotten used to the community being relatively small and unchanging.

So thanks to de Chardin and to all of you who are part of this tribe, committed to doing our work in furthering the evolution of consciousness. Thanks for the “immense fulfillment” of friendly collegiality.