Excerpted from John’s forthcoming book,
The Great Growing Up: Being Responsible for Humanity’s Future

In my last book – Getting to the Better Future – I quote global thinker and philanthropist Lynne Twist on the subject of taking a stand. She says, “Taking a stand is a way of living and being that draws on a place within yourself that is at the very heart of who you are. When you take a stand, you find your place in the universe, and you have the capacity to move the world.”

Twist also talks about living “the committed life” and lives her own life from that place of commitment. She has definitely taken a stand with her life, inspiring anyone who is fortunate enough to know her.

Another example of one who took a committed stand is John Robbins, heir to the Baskin Robbins fortune. Turned his back on his inheritance and refusing to continue choosing a world of pollution and extinctions, Robbins chose to “actively engage with the living world.” Julia Butterfly Hill took a stand by sitting in a tree for two years. At a height of 180 feet, she in the canopy of an ancient redwood tree for 738 days to help make the world aware of the plight of ancient forests.

Mahatma Gandhi, Mother Teresa and Martin Luther King, Jr. took stands for what they believed. So did Apple Computer founders Steve Jobs and Steve Wozniak when they set out to provide computers for individuals. Other stand-takers include MADD (Mothers Against Drunk Driving) founder Candace Lightner, Nelson Mandela and Mikhail Gorbachev. They all serve as examples of what one person can do when they take a stand for something they really believe in.

What about lesser known people whose stands have impacted the world? Who can forget the television image of the young man standing in front of a column of Chinese army tanks during the Tiananmen Square democracy demonstrations in 1989? 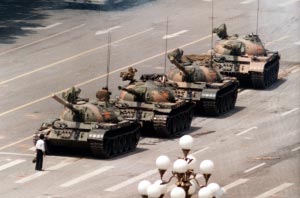 As the lead tank altered its path to avoid the young student, the man calmly shifted sideways so he remained in its path. Nicknamed “Tank Man” his stand inspired millions around the world.

How about the collective stand taken by tens of thousands of Arabs in the pro-democracy movement sweeping through the Middle East and Africa in more recent months?

Stand-taking requires courage. Paul Mlotok, formerly the top-ranked oil industry analyst on Wall Street, says “courage can be as important as the choice.” Taking a stand requires a kind of “spiritual bravery” that comes from one’s soul – not a war-hero type of bravado. The courage in taking the stand can sometimes be just as big a factor in one’s life as the stand itself.

Mlotok quotes the Hindu avatar Krishna: “A warrior who has acquired great merit, and who has such an opportunity for battle, is like a person who has found a wish-fulfilling gem in his path.” He elaborates, “facing difficult choices is not just something to be endured, but rather a blessing for which we should be thankful. It is a chance to ‘do battle’ – to develop our spiritual skills and understanding.”

There are thousands of stories of people who have taken stands throughout history. We can all recall those who inspired us in some way. Stands are different from positions. Stands provide inspiration that generates more stand-taking and action by others. Positions, on the other hand, largely invite polarization, either opposition or agreement, which fosters more debate, conflict and sometimes violence.

A 2004 magazine interview with clothing and shoe entrepreneur Kenneth Cole was titled “Stand for something or step aside.” Then there’s the old saying that “if you don’t stand for something you will likely fall for anything.”

Former Fetzer Winery CEO and organic wine farmer Paul Dolan tells us once an organization takes a stand shifts in corporate culture start to happen. He addresses the dimensions of stand-taking: “First, a stand is personal for each of us. It’s about seeing a personal possibility of making a contribution and fully expressing our commitment to that. When I think about our stand on organic viti-culture, it connects me to my immediate, personal desire to make a difference, right here, right now, in behalf of the earth.”

Dolan concludes, “Third, each of us is responsible for generating the conversation about the stand. This grows naturally out of the first two dimensions. You’re responsible for making the stand come alive for others, to attract them to it as a possibility, and to advance its discovery and exploration.” This is where a higher personal commitment can have a positive influence on a company and ultimately, an entire industry.

Entrepreneurs and business leaders like Dolan who commit themselves to their visions are experienced stand-takers. Their courage in holding to their visions and not allowing them to be hijacked is as important to their soul as it is to the vision to which they’ve committed themselves. They know how to maintain their vision and their resonance, so they are undeterred no matter what distractions come their way.

One way both individuals and organizations can take a stand regarding the future of humanity is by becoming an ally of FourYears.Go, an initiative started by Lynne Twist and her husband Bill. The mission of FourYears.Go is “to shift humanity’s course toward a just, fulfilling and sustainable future by the end of 2014.” Anyone joining the initiative as an ally agrees to take on that mission, personally or organizationally. I feel so strongly about the need for such a bold stand that I am assigning all my royalties from The Great Growing Up [my forthcoming book from which this article is excerpted] to FourYears.Go.

The world is in great need for stand-takers right now, particularly in our organizations. Most importantly they are needed in those large, publicly-traded corporations. Many, many people inside these companies know what needs doing. The Wall Street culture leading up to the 2008 financial crisis and the companies involved in the scandals presented many opportunities for individuals to take stands when they saw something of questionable integrity going past their desk. But almost all remained silent, choosing not to be whistleblowers but just “going along.”

Conspiracies of silence are just as complicit in these situations. Martin Luther King, Jr. says, “Our lives begin to end the day we become silent about things that matter.” People who remain silent lose part of themselves; their aliveness takes a hit. King also tells us, “A time comes when silence is betrayal.” It is betrayal of ourselves as well as of the stand one might have taken.

We don’t need more answers to our problems. We have plenty of answers. What we lack is enough people willing to take courageous stands – to act on what they already know – what many people pretend they don’t know but, down deep, they do.

When confronted with taking a stand, the egoic mind tends to manufacture instant rationale for inertia. “What can I do, I’m only one person?” is a common example. “I’m not is a position to make any real difference” is another. I love a line I first heard from the late business entrepreneur and social activist Anita Roddick: “If you ever think you are too small to make a difference, try getting into a sleeping bag with a mosquito.”

Historian Alan John Percivale Taylor reminds us “All change in history, all advance, comes from the non-conformity. If there had been no troublemakers, no dissenters, no whistleblowers, we should still be living in caves.”

What is your stand? What do you stand for? If people look at your life what would they say you stood for? If you are having difficulty coming up with an answer, perhaps this deserves some personal exploration on your part.