In this issue:
1. Readers’ Comments
2. Newsbits
3. March Editorial: “The Butterfly Metaphor for Transformation”
4. Preview: Next Month’s Editorial
5. Quote of the Month – Warren Bennis
6. Hot Link of the Month
7. Want to Blog?
8. Click and Play of the Month

Thanks to Dar Gillett and Wes Thomas for your comments and to Bridget Reynolds in Oregon who writes,

I forwarded your newsletter to a number of friends in England and also Australia and New Zealand. Your thoughts and inquiry are brilliant, and need to be read. Again thank you for your work.

My very best to you,
Bridget

Rick Sidorowicz published my editorial from last month on his website, The Mindful Network. Thanks, Ric!

My blog post for March is unusual for me. Recently I participated in a dialogue about systems thinking and the topic of the global financial crisis naturally arose. As more of us addressed the possibility that something had to die in order for something new to emerge, the lyrics to the Buffalo Springfield sixties hit song popped into my head: “what’s goin’ down?” That evening I was inspired to write a poem which I call “Echoes of Buffalo Springfield.” Here’s the original song from the 1960s:
[youtube]http://www.youtube.com/watch?v=0g9PiEgYYUU[/youtube]

[Last month I featured champagne as metaphor. This month it is butterflies. That’s it on metaphors for a while.]

As we began the new year and welcomed a new U.S. president into office I was reminded of the metaphor of the caterpillar turning into a butterfly, befitting a time for transformation – new beginnings and paradigm shifts. The market crash offers a triggering event that could lead us into another aspect of a paradigm shift. 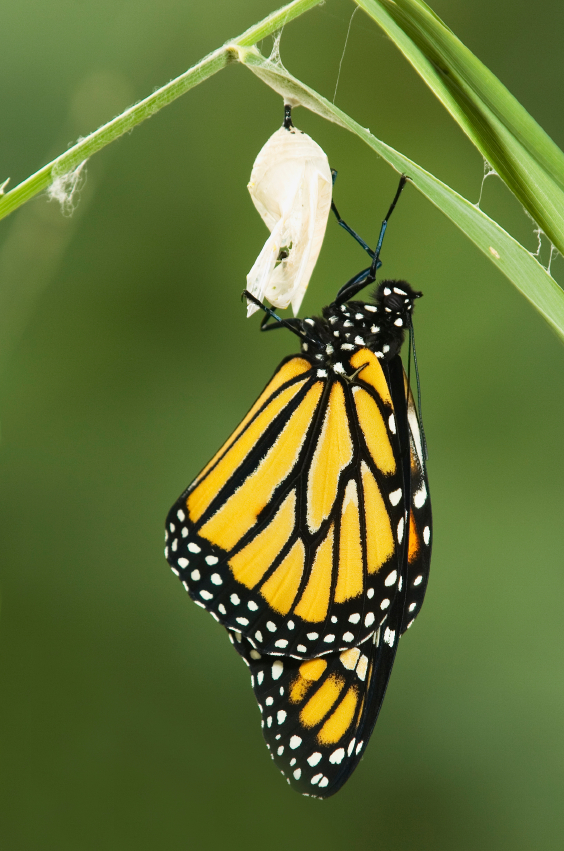 I first heard the metaphor from evolution biologist Elisabet Sahtouris who made the analogy between this miracle of Nature and the prospective global paradigm shift in which we find ourselves today. Sahtouris tells this story: “My favorite metaphor for the current world transition, first pointed out to me by Norie Huddle (author of Butterfly), is that of a butterfly in metamorphosis. It goes like this:

For a long time biologists could not understand why the caterpillar’s immune system attacked the new cells, but recently it was discovered that butterfly (imaginal) cells carry a completely different genome. Apparently all metamorphosing insects acquired the second genome somewhere in their evolution and have lived these double lives ever since. If we see ourselves as imaginal cells working to build the butterfly – a better world – we will also see how important it is to link with each other in the effort and to recognize how many different kinds of imaginal cells it will take to build a butterfly with all its capabilities and colors.

I love this metaphor because it shows us why we, who want to change the world, are co-existing with the old system for a while and why there’s no point in attacking the old system because you know the caterpillar is unsustainable. It’s going to die. The question on which we can focus is “Can we midwife a viable butterfly?”

Patience and understanding is called for in this metamorphic transition. While many of us understand how paradigms change few of us possess the patience. In his book Callings: Finding and Following an Authentic Life, Greg Levoy he tells a story that speaks to impatience, also using a butterfly metaphor. He writes:
In his autobiography, Nokos Kazantzakis, author of Zorba the Greek, described an incident in which he came upon a cocoon cradled in the bark of an olive tree just as the butterfly was making a hole and attempting to emerge. Impatient for results, he bent over it and warmed it under his breath, by which he succeeded in speeding up the process. The butterfly, however, emerged prematurely, its wings hopelessly crumpled and stuck to its own body, which needed the sun’s patient warmth, not the man’s impertinent breath, to transform it. Moments, later, after a desperate struggle, the butterfly died in the palm of his hand. “That little body,” he wrote toward the end of his life, “is the greatest weight I have on my conscience.”

As this butterfly story teaches, we have to learn to trust that all things happen in their own time when our lives are ready to receive the miracles in store for us.

Both of these stories can serve us as we weather this storm of the collapse of one economic system and hospice the old while standing ready to midwife whatever new system will emerge from the rubble. As Buffalo Springfield sang long ago,

There’s something happening here
What it is ain’t exactly clear
…. Everybody look what’s going down

[My blog this month features a poem I wrote recently inspired by the Buffalo Springfield song as it applies to the global financial crisis.]

4. NEXT MONTH’S EDITORIAL: “Women in Business: Putting the Powerful Feminine to Work”

5. QUOTE OF THE MONTH:
“People who cannot invent and reinvent themselves must be content with borrowed postures, secondhand ideas, fitting in instead of standing out.” – Warren G. Bennis

6. HOT LINK OF THE MONTH (see a complete list of links:

The Declaration of Earth Citizenship is a public resolution where citizens declare their commitment and act in such a way as to transform “transform global issues and thereby themselves for the collective good.” John contributed to the initial draft and has signed it.