The more delving I do into the realm of non-duality/oneness/Advaita the more I am realizing that what we consider real is not necessarily true. Absolute truth is so difficult to define, particularly in a collective consciousness where most of the reality is a dualistic dream state or soap opera – a “Truman Show” where we all play the role of the lead character. 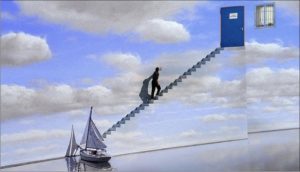 In the movie The Truman Show, Jim Carrey plays the role of Truman Burbank who has lived his entire life inside a 24/7 television soap opera, controlled by the show’s creator “Christof” – played by Ed Harris. In one of the final scenes, Truman’s sailboat punctures the wall of the domed set, he finds an exit door (see picture right), and begins to climb the stairs leading to the outside world. Christof, speaking directly to Truman through a speaker system, unsuccessfully tries to convince him to stay, stating there is “no more truth” in the real world.

Sages say there is only one truth – what is commonly called “I Am/Consciousness” – and often refer to Descartes’ phrase “cogito ergo sum” which is usually translated into English as “I think, therefore I am.” Some sages claim this is an erroneous translation and it should read “I know, therefore I am.” In any event, nondualists argue that this is the only truth we can know for sure. Everything else is illusion or stuff we have dreamed, believe or made up. We confuse the perception with the real thing, the menu with the meal, the map with the territory. So while truth may seem quite simple for a few, it is quite contrary to the collective consciousness most of us live and work in every day. Therefore it is intermixed with vast amounts of untruth, clutter to which we have become attached that keeps us distracted, entertained and asleep.

For me it is much simpler to define what is real. Largely, what is real is what we believe to be real. But despite it being “real,” it is not necessarily true. In fact, it is most likely untrue. Most people, I assert, believe if something is real, it is true. But this is not the case!

When we are confused between what is true and what is real, we can see how factual accuracy can be a slippery slope, confusing the conversation even further. Nonetheless, the ever-widening ideological divide finds each side with their “facts” – their firmly-held beliefs.