Often I experience the existing paradigm as having a context of separatism while the more desirable new paradigm would possess a context of connectedness. Certainly these are not the only facets of the potential difference but they are important ones.

Looking at this one facet, can you see how a worldview of “we are separate” serves to keep us divided, leading to greater mistrust and even fear? Can you see how this plays into conflict, even violence? Seeing ourselves as disconnected, different and often afraid and unwilling to trust “the other,” or as one contemporary U.S. TV commercial poses it, “not you,” promotes negative separateness.

The recent Winter Olympics followed closely by the Academy Awards reminded me of a new paradigm method of honoring excellence in any kind of performance. Instead of having standalone winners, how about honoring all performances that are outstanding? 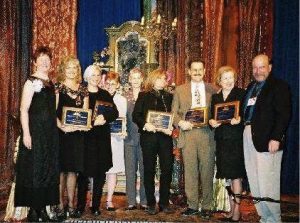 One example of how this might work from my own experience:

In 2002, Judi Neal and I created the Willis Harman Spirit at Work Award as a way of honoring companies who were explicitly integrating spiritual principles into their corporate cultures. I served on her board for the Association for Spirit at Work and headed the selection committee. Recognizing my request was bucking convention, I agreed under the condition that we would honor all deserving companies, not just one. The committee agreed without much dissention. The first year we honored seven companies (see picture of the ceremony in New York City above).

The awards were renamed the International Spirit at Work Awards the following year and continued until 2008. During their six year run almost fifty companies were honored. Recipients included The Body Shop, Eileen Fisher, Inc., The Times of India, Berrett-Koehler Publishers, Medtronic and others from eleven different countries.

Clearly, a change in how we honor excellence does not in itself cause a paradigm shift but it is one of many facets that need to shift for there to be a major shift in the overall context. The shift needs to come from how we think, our attitudes and values, and, eventually, our behavior. As Harman wrote in the late 1970s, there needs to be a “global mind change.”

In 1988, I wrote an article in which I listed characteristics of the old paradigm and the new one. It was the last time I did this because people saw the two columns and made the old paradigm wrong and the new paradigm right. Talk about separateness! I inadvertently contributed to the very opposite of my intention.