Most of us have heard that one of the most valuable resources for a magician is the ability to misdirect the audience’s attention so the illusion will appear even more magical. Here’s what Wikipedia says about misdirection:

Misdirection is a form of deception in which the attention of an audience is focused on one thing in order to distract its attention from another. Managing the audience’s attention is the aim of all theater, it is the foremost requirement of theatrical magic. Whether the magic is of a “pocket trick” variety, or, a large stage production, misdirection is the central secret of all magic. The term is used to describe either the effect (the victim’s focus on an unimportant object) or the sleight of hand or patter (the magician’s speech) that creates it.

The words that jump out for me in this definition are “distract” and “unimportant object.” The magician distracts the audience, getting them to focus on some unimportant object instead of where the sleight of hand is going on. Dariel Fitzkee, himself a magician and author of several books on magic, notes: “The true skill of the magician is in the skill he exhibits in influencing the spectator’s mind.” 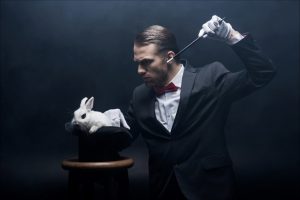 It occurs to me that this is quite similar to what my negative ego does if I allow it to. It tries to distract me from what is important and meaningful so I will instead focus on something relatively trivial. For example, it will tempt me into a conversation that is largely about gossip rather than have me participate in a more meaningful conversation that could generate something positive. Another misdirection my negative ego likes to do is to tempt me to complain, which often sucks others into complaining – an activity in which nothing is achieved other than venting anger or discontent and burdening one another with those negative emotions.

My negative ego is as wily as a fox, or for this context, as tricky as a magician. If I allow it to, it can misdirect me to any variety of shiny glimmering objects that might hold my fascination. But these distractions do not serve my greatest good. They may “keep me busy” or idle away the time but they don’t contribute to my personal development nor to society in any way.

The key words here are “If I allow it to…” I must remain awake, conscious, if I am to recognize the temptations of my negative ego and, therefore, choose not to take the bait when it is dangled in front of me. Glimmering baubles can catch the attention of infants, even adolescents, but I am adult now and my attention is one of my biggest assets; where I put my attention determines how I will live, what values I hold dear, who I care for and my sense of purpose.

If I allow my attention to get misdirected by my negative ego, I am compromising my integrity, selling a bit of my soul, and wasting energy by engaging in meaningless distractions.

Our attention is the scarcest resource we possess. It deserves to be directed to meaningful endeavors rather than meaningless distractions, wasting our time and energy which could be applied much more wisely.