Since my main focus for many years has been conscious leadership, I am often asked to define consciousness. As ineffable as that is I still make vain attempts to define this indefinable term. Let me begin by mentioning two of my favorite quotes on this subject:

“Consciousness is like the Trinity; if it is explained so that you can understand it, it hasn’t been explained correctly.” – Behavioural Brain Sciences Journal

“The biggest hurdle to defining consciousness is the word itself. A noun is inappropriate. Consciousness does not exist as a “thing”. It is not a thing to be known, but knowing itself.” – Peter Russell, physicist, author, The Global Brain and other books

One of my prior attempts to define the indefinable leaned on the dictionary definition of consciousness which claims it is synonymous with awareness, a commonly held belief. I added that I saw it a bit differently, bringing in the action component so part of consciousness was what one did or how one acted in face of what they were aware of. A mystic might sit atop a mountain all day long and achieve a high level of awareness but what does he or she do with that awareness? What responsible action follows the awareness? So to put it is simple formulaic terms:

More recently, I was asked to say more about the awareness component. Now I have come up with a further extension of this definition, perhaps a refinement for our understanding of human consciousness. Consider awareness to be three dimensional (see illustration at right/below) where X and Y represent the depth and breadth of the subjects of which one is aware plus a third dimension – Z – of self-knowledge, or the degree to which one knows oneself. 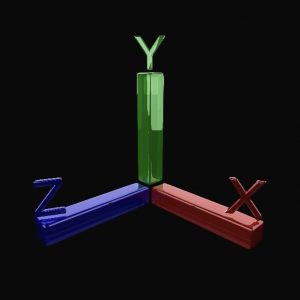 This third dimension is where one develops a relationship with something larger than oneself, a sacred relationship that might be called Providence, Source, God, Universe or any other labels one cares to call it. This is where many people get uncomfortable – getting into the more mystical or sacred arenas. However, in my view, this is where deep diving into oneself leads.

As we get to know ourselves in deeper and deeper ways this relationship with something larger looms like a mystery until we stop avoiding it and invite it into our inquiry. As we explore further and further into this dimension we are swimming in sacred water.

For me, conscious leadership demands that we explore all three dimensions, not necessarily equally but not ignoring any one either.

We all know people who may be extremely aware and knowledgeable about some subject, we might even say conscious, but are completely out-to-lunch when it comes to another subject. As one example, one of the most brilliant men I know is very uncomfortable in social settings. Another colleague is an expert in the field of consciousness studies but has no idea how to run a business or how an enterprise works in a market economy.

Each dimension of one’s awareness – one’s consciousness you might say – needs to be developed for one to be considered a fully aware/conscious person.

As an idea guy I tend to get fascinated with ways of explaining things which are challenging to explain. I have not seen anyone compare awareness to a three-dimensional model and welcome any thoughts readers might have on the subject. Email me at John@Renesch.com with “three dimensions” in the subject line.