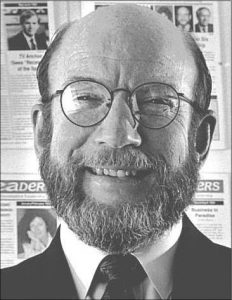 John at New Leaders circa 1990s

Back in 1998 when I started this newsletter, I recall seeing this quote from Tom Atlee, a fellow advocate of conscious evolution:

I’ve come to believe that things are getting better and better and worse and worse, faster and faster, simultaneously.

I invariably get a few nods and chuckles from people with whom I share it. So it apparently resonates with people.

This Atlee quote also relies on our personal assessments as to what is better, worse and faster – all value judgements that we humans love to make.

I’m reminded of the parable of the Chinese farmer,   popularized by Alan Watts (1915-1973), and repeated here:

Once upon a time there was a Chinese farmer, whose horse ran away.   And all the neighbors came around to commiserate that evening, “So sorry to hear your horse has ran away. That’s too bad.” And he said, “Maybe.”

The next day the horse came back, bringing seven wild horses with it, and everybody came around in the evening and said, “Oh, isn’t that lucky. What a great turn of events. You’ve now got eight horses.” And he said, “Maybe.”

The next day his son tried to break one of these horses and ride it and was thrown and broke his leg. And they all said, “Oh, dear that’s too bad.” And he said, “Maybe.”

The following day the conscription officers came around to recruit, to force people into the army, and they rejected his son because he had a broken leg. And all the people came around and said, “Isn’t that great.” And he said, “Maybe.”

And so it goes. It’s hard to tell sometimes what is good fortune and what is bad. Often the positive doesn’t become evident for some time, like perhaps decades, but it frequently does turn out that way.

I know that in my life, every seemingly negative event that occurred (excepting deaths) has turned out to have a positive outcome. Every one! This includes getting drafted into the U.S. Army at a most inconvenient time, being physically assaulted, getting fired from a job I thought I was destined for, a major romantic betrayal, a painful “business divorce” and many more.

This experience has been so consistent for me that now, in my older years, I no longer jump to the conclusion that the event is a breakdown, or a disaster, or something horrible. I observe it with more neutrality, remaining open to it turning into something positive in the longer term even though it might appear negative in the present.

In late 1997, when New Leaders Press closed and my role as Editor-in-Chief disappeared, it was the first time in my adult life that I didn’t have a company name to sit behind. Even though most of these companies were ones I had founded or co-founded, I always had a “front” so-to-speak, a company running interference for me. Suddenly I found myself without an enterprise; I was simply a bare-assed naked John Renesch. Working at home. No office. No staff. No company. Just me.

I had to learn how to use a computer, even type my own articles! Friends offered to help me build a website so I had to decide what I was offering the world. What would I say on the website? Once I chose how to be in the world, naked and unadorned, it seemed like a newsletter was a good idea. Should it be paid subscription like The New Leaders hardcopy newsletter had been, or free? By August, I started publishing it and offering it free.

That was twenty years ago! This newsletter began as Aha! A few years later I changed it to Better Future News after a new book I had just published. And, lastly, it became John Renesch’s Mini Keynote.

In closing, a look back at the past twenty years reveals lots of change…too much to cover here. I think the biggest thing that’s changed as far as my work and the work of a relatively small group of us who have been committed to what Willis Harman called “global mind change” (or what I call “consciousness shift”) is that a true global movement in conscious leadership has surfaced. It is fun to see so many new people, and many younger people, eagerly jumping into the pool and getting wet; sure, some aren’t able to swim well yet but their enthusiasm can be applauded. As in any movement, there are elders to do mentoring and newbies to be mentored. There are teachers, academics, and professionals (coaches and consultants) and there are executives and entrepreneurs who are in the trenches, dealing with the practical and the nitty-gritty of everyday, non-theoretical leadership consciousness – where the rubber meets the road.

On a personal note, I think the biggest changes over the past twenty years is 1. evolving into an elder and 2. looking at the bigger picture. I’m less likely to start big projects now and more likely to serve with others. More likely to mentor than lead.  Less interested in promoting and more interested in supporting.

Thanks for reading and helping me celebrate two decades of memories.