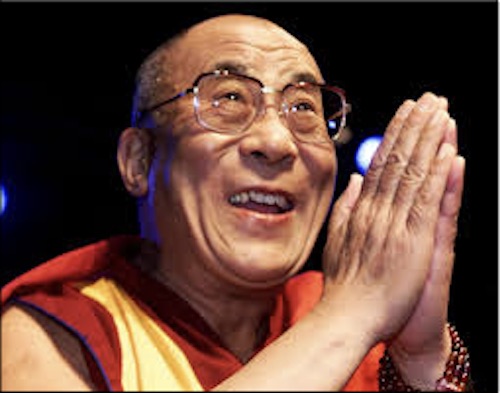 I just finished a book by His Holiness the 14th Dalai Lama – Advice on Dying: And Living a Better Life. I’m not planning to die anytime soon but I wanted to absorb any wisdom this very special Tibetan monk has to share about aging (which I am) and dying (which I’ll do eventually).

His Holiness stresses the need to accept the impermanence of human life as a means of offsetting the human tendency to avoid thinking or talking about death or the ending of a lifetime on Earth. I’m finding it a good test for how much fear of death I may have, even if buried deep in my subconscious.

He introduces an idea that might seem quite novel for many, particularly those whose cultural traditions see death as a negative thing. He writes:

….if you have reflected on the importance of extracting the essence of this life situation and the necessity for spiritual practice, and have reflected again and again on impermanence, then through remembering these instructions while dying, you will not come under the influence of unfavorable conditions such as grief and sorrow. All of the appearances associated with death, instead of distracting you, remind you of the practice and urge you toward meditation.

With this in mind, it will be possible to die with joy and confidence, like a child happily returning to her parent’s home.

To die with joy and confidence…what a splendid idea! How often do we associate death with joy?

My response to dying has changed dramatically over my lifetime. In my youth I considered it a bad thing, although inevitable. People were really sad and somber whenever someone passed away. I lost my father when I was 12 and my grandfather at 16 – both very sorrowful indeed! I lost several friends in my late teens and twenties – a couple by suicide and several in car crashes. For those who are long time readers you may recall I was involved in motorsports for several years when I was younger and lost a few friends in on-track racing accidents.

In the 1970s I began to participate in more celebratory memorial services which evolved into celebrations of the dead person’s life that were more joyful – a far cry from the solemn, unsmiling funeral services to which I had grown accustomed.

In my latter years, having developed a different belief about the afterlife, I have come to see death as a natural “transition” to a spirit world that may or may not lead to another incarnation.

There’s a prayer widely attributed as a Native American proverb that goes like this:

When you were born you cried and the world rejoiced.

Live your life so that when you die

The world cries and you rejoice.

This is my wish – to rejoice when I die, to feel as though I am returning home with joy and confidence. I expect it will feel something like coming home after a vacation. No matter how nice the holiday was there’s nothing quite like going to sleep in your own bed.