When I first entered the newly-named “human potential movement” in the early 1970s there were a number of ideas that had real meaning associated with them. In writing my recent blog for The Great Growing Up about leading consciously when it matters, I was reminded of one of these – the idea of being in or out of integrity. 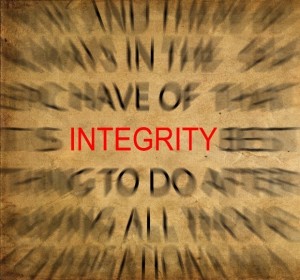 When someone was considered “out of integrity” it meant their walk and talk did not match or they were not impeccably honest or they broke their word. Somewhere over the past several decades the whole idea of personal integrity seems to have become obsolete. The subject has gone off the board. I rarely hear the term anymore.

Have we become so used to people being out of integrity that we have accepted this as the “new normal”?

Recently I read that when we are out of integrity we spend too much of our time fixing, propping up and doing the expedient thing rather than the right thing, especially when it is the right thing when it matters!

As a society, we seem to be spending much of our time “fixing, propping up and doing the expedient thing” these days. Everything in our daily news could fall under those categories. Is this a sign that we are out of integrity as a society?

The word integrity evolved from the Latin adjective integer, meaning whole or complete. In this context, integrity is the inner sense of “wholeness” deriving from qualities such as honesty and consistency of character. As such, one may judge that others “have integrity” to the extent that they act according to the values, beliefs and principles they claim to hold.

When a person (and, I would argue, a society) is “in integrity” they are able to respond, and do so with conscious intentionality and authenticity, rather than in a knee jerk reactive manner. Being in integrity creates a context of dominion, balance, good health and strength. The power is not based on force or muscle but a sense of dominion and presence – an integrated wholeness.

Perhaps being in integrity is what we long for, that “coming home” the sages talk about. It might also be seen as that “nostalgia for what could be” which I just wrote about in my blog for The Futurist.