[This is a continuation of last month‘s Mini Keynote (see link here), in which I wrote about impossible dreams and how some people live their fantasies] 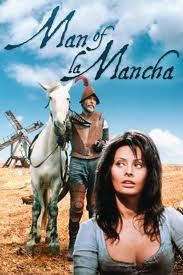 Allow me to clarify what kind of martyr I am talking about here. I am not talking about people who have suffered or been persecuted because of beliefs or values they held dear (early Christians in Rome, Jews, Muslims, Native Americans, African-Americans, etc.). Some might call the quality of martyr I’m addressing as the “martyr complex” which can be defined as putting oneself to considerable trouble for the sake of some noble cause so that one will feel exceedingly self-righteous and compel the sympathy of others. The intent is different! This is what spiritual teacher Caroline Myss describes as the “shadow of the martyr archetype.” She writes:

Within the self-help field, the shadow Martyr is viewed as a person who has learned to utilize a combination of service and suffering for others as the primary means of controlling and manipulating her environment.

These martyrs see themselves as making a sacrifice and thus deserving admiration for what they state as their intention – to bring about world peace, to end hunger, to bring education to the poor and disadvantaged. They want to be admired for what they claim to intend, not what they actually achieve.

THE IMPACT THESE “SHADOW MARTYRS” HAVE ON OTHERS

People who are friends with people who live for their fantasies can get really tired of the ongoing sagas of struggle and hardship as they seemingly strive and toil toward their objective. After a spell, anyone who cares for the shadow martyr can feel so badly about their unrequited efforts that they exhaust all attempts to cheer them up. Eventually, it becomes too exhausting or tiresome to be around these people so they stop seeing them socially.

People can tire very quickly of friends and colleagues who live for their fantasies, droning on about their ongoing sagas of struggle and hardship in pursuing their goals. After a spell, anyone who cares about the martyred one becomes so frustrated and exhausted by their unrequited and fruitless efforts at cheering them up, they eventually withdraw from their company.

I have seen this from a shadow martyr’s perspective. Going through a state of martydom myself, I became so difficult to be around that some friends started backing away from me. I have also observed this in others, people whom I cared about martyring themselves to various projects or causes, seemingly caught up in their own inability to succeed at them. I burnt myself out trying to help them, and so backed away.

When people spend too much time around others who are always pursuing idealistic fantasies and “noble causes,” they can get very pessimistic – even cynical – about anything that smacks of “good work”, even if positive outcomes are achievable. Thus martyrs deepen the resignation, apathy and cynicism of those around them – hardly a positive contribution to the world.

When people become resigned, apathetic and cynical in this manner they might already have been dealing with their own disappointments or shattered dreams, their martyred friends having most likely provided further discouragement from aiming high. “Get real” is an expression often heard as people chastise those who, realistically or unrealistically, set high goals or dream big.

Ironically, people who become attached to their fantasies – probably themselves wearing the badge of martyrdom – end up adopting the exact opposite mindset to the one they started out with. Thus they perpetuate the attitude that anything noble and good is a waste of time and a source of grave disappointment. That was, after all, what their friends had experienced.

When one drops the attachment to the fantasy, and appreciates oneself for who one is without the additional wardrobe of noble causes, one may choose to dream something either grand or more ordinary. But once a person sees their objective as a simple choice they are making and not an extension of their self-image, their dream is a simple objective that can be pursued as energetically or wholeheartedly as they choose.

In my days of being a martyr, you could summarize my fantasy as “saving the world” – something that many are striving to do these days. Never mind that the world does not need saving. We humans could use lots more help if we’re going to survive here on Earth but the planet will most certainly survive us. For seven or eight years, my work consisted of this “noble cause” which I felt completely committed to and, because of this distorted attitude toward myself, I became my work. My work was my identification. It was who I was. In my eyes, I was doing great work even though there wasn’t any evidence that I was making much of a difference. The grandiosity was in the eyes of the beholder – me!

Once I was able to differentiate between who I was and who I was trying to be, and saw what I really wanted to achieve, I was able to do something meaningful. And here’s the rub: that “something” could be exactly the same project! Saving the rainforest can be one person’s fantasy – their alter-ego’s noble cause – and someone else’s dream at the same time. It is the consciousness in which the vision is held that makes the difference. The end of deforestation in the Amazon has a much bigger chance of realization as someone’s dream than it does as the martyr’s fantasy.

A CALL FOR IDEALISTS: CHECK YOUR EGOS AT THE DOOR

If we want to improve the world or any of the organizations and systems within it, I encourage big dreams – visions that challenge us to rise to the occasion, test our resolve when it comes to our collective future, and inspire others to join with us in making it happen. Human beings have a terrific track record of achieving great things, going beyond what we ever thought of as possible. We can continue this tradition and create a better future for ourselves and all our children and their children. It is possible. But it cannot be done by holding these visions in the world of fantasy, wrapped in ego or martyrdom. As I heard someone say recently, there’s nothing wrong with being an idealist so long as there are no illusions. Noble causes and the fantasies they give way to are illusionary – palliatives for the egoic mind.

Let’s not confuse our egos with the causes we take on. Let’s not foster martyrdom in ourselves or in others by trying to take on all the many tasks that need to be accomplished if we are to create a better world. Let’s not accept petty consolations for our efforts – eating the menu instead of the real food. Let’s not anesthetize ourselves by getting distracted from the real work. Let’s not endure adolescent behavior from ourselves or any others we know.

Let us insist on mature choices. Let us demand results for our efforts. Let us set measurable benchmarks that will demonstrate progress in reaching our dreams. Let us become connoisseurs of consciousness and partake only of the real thing – large scale, sustainable change for the good of the global commons. Let us dare to dream that everyone on Earth can have their basic needs met and that there’s plenty of opportunity for everyone to achieve, succeed and dream even bigger dreams.

I am now a true dreamer. And I am dreaming big!