Have you ever watched a TV report on a public demonstration and you identified with the people demonstrating? Or participated in a demonstration yourself? If so, have you noticed the people who are drawn inevitably to large gatherings, and who take great delight in becoming the center of attention? I call them exhibitionists who may seem harmless unless they resort to violence. Most agree that vandalism and violence will ruin an otherwise peaceful demonstration but what about exhibitionists? Many of these clowns may not even know what the cause is, why people are demonstrating or marching. They don’t care because they just want to get on TV and many of them will go to extreme lengths to accomplish that. 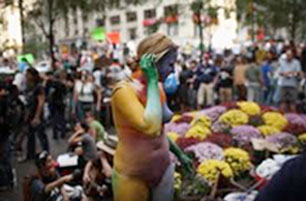 Before we attacked Iraq, I marched in two demonstrations here in San Francisco. Believe it or not, these were my very first marches of this kind. There were close to a million people, the vast majority of whom looked like me, reasonably well dressed, well groomed and well behaved. But along the fringes, where the cameras were more likely to record them, were the exhibitionists – near-naked drag queens, odd looking young people carrying placards with extreme slogans and wildly-costumed characters of all kinds.

The crowd seemed to accept these strange looking and oddly behaved characters as harmless. But they were not harmless. By seeking their fifteen seconds of fame and getting on TV they did more harm than good for the cause. The vast majority who turned out and committed their Sunday afternoon are unable to have the impact they wanted to have. People at home would see the “crazies” marching down Market Street since that is what the cameras focused on. The casual viewer can easily assume what they are seeing is representative of the entire crowd.
What riled me about this now, a decade later?

The other day I was at a friend’s home watching the late news. The Occupy demonstrations around the country were being reported. The reporters were interviewing the oddest-looking people (spiked hair, unkempt beards, etc.), some of whom weren’t quite sure what the demonstration was about. They just wanted to get on TV. My friend observed that it appeared the Occupy people apparently don’t know what they wanted. I could not argue with him based on the lack of articulation by those the media chose to interview and put on the air.

These exhibitionists are not as harmless as most people think. Their selfish desires to get on TV invalidate the causes they claim to support by their presence. One freaky oddball who gets on the evening news can sabotage the objectives of thousands of committed people who are risking their comfort and safety to stand for a cause they feel strongly about.

When the best-organized, well-meaning intentions of many thoughtful people get corrupted by a few oddly looking and misbehaving bozos, their mission is hijacked and their efforts are diluted.

How do organizers prevent these characters from ruining their demonstrations? In a country whose constitution stands for freedom of expression, that’s challenging to be sure. I appeal to the organizers of cause-related demonstrations to do what they can to reduce the infiltration of these exhibitionists minimize the negative impact on their message.

When the needs of the whole take precedence over the needs, wants and egos of the individual we will start to see real change happen. Until that tipping point is reached we shall continue to endure this immature fragmentation that prevents us from bringing about any meaningful and lasting change.