For centuries, leaders of all types have found value in confiding with their peers. Heads of State seeking advice from their predecessors, heads of large corporations having confidential conversations with friends in similar positions, having private conversations with peers – even in a competing enterprise – are all examples of intimate wisdom circles where people feel understood by someone who has been in or still is in their shoes.

One of the most widely-known and largest providers of executive peer groups is The Executive Committee, more recently renamed “Vistage,” which started forming groups back in the middle of the last century. Over the years, they and others have attracted tens of thousands of members all over the world. There is no doubt that the principle of executive peer groups is a powerful resource for leaders of all kinds. The goal of these groups is to be a confidential source of intelligence and experience so members support one another in ways their reports or co-workers cannot. Strong bonds are formed among members in these groups, usually numbering around a dozen people. As a result, members are better able to improve the performance of their organizations and become better leaders in the process.

I am a partner in a new company, FutureShapers, LLC, which will host executive peer groups called “Roundtables.” These Roundtables utilize the same time-tested architecture as existing vendors but they differ because the mission is different. In addition to being a confidential source of intelligence, experience and support, the Roundtables are keenly focused on improving the consciousness of their members so they become more self-aware in their roles as leaders. This enables them to find greater meaning and fulfillment in their personal lives, their work and in the work of their organizations. 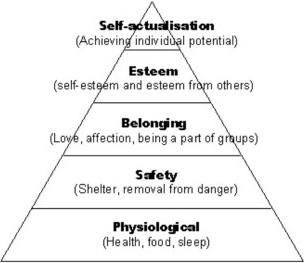 Maslow’s “Hierarchy of Needs” places self-actualization at the top of the pyramid (see diagram). But there is a still higher aspiration once people access this top level of Maslow’s pyramid, a level championed by Viktor Frankl and others, referred to as “self-transcendence.” Here one identifies the universe as an interconnected whole and themselves as an integral part of it. This is the objective for FutureShapers Roundtables – that each member is aided and informed by the Roundtable experience so they continue to grow toward this transcendent place and support their fellow members in doing the same.

The Roundtables typically consist of 10 to 12 peers hosted by FutureShapers Certified Hosts who facilitate the meetings and offer individual coaching sessions between sessions.

If anyone is interested in facilitating Roundtables, or knows anyone who might be interested, I welcome an email. Our first Host Learning Retreat is taking place November 9-11 in Northern California and there are a few places still available. Email me at john@renesch.com.