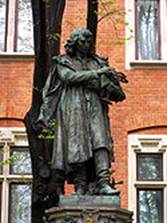 If you have ever lived through a time when some popular idea became outmoded and a new way of looking at things became accepted in its place, you have survived what academics call a “paradigm change” in worldview. Perhaps you are old enough to remember when driving home after having a few cocktails was more socially accepted than it is today. Those were the days before the “designated driver.” If you can remember when driving with some alcohol in your system was okay but now wouldn’t think of it, you have experienced a paradigm change in our culture. If you lived through a time when women were limited to certain roles or when racial prejudice was widely tolerated you survived one of these transitions.

History is filled with examples of Previously Accepted Notions (PANs) losing credibility and being replaced with Newly Accepted Notions (NANs). Another example was the way the USSR and the German people viewed the Berlin Wall one day in 1989 and saw it so differently the next. Or when Copernicus’s ideas about the earth revolving around the sun instead of the other way around finally took hold with the thinkers of the day. Or when the ancient Greek’s discovery that the earth was round finally became accepted as a NAN some 2,500 years later! Here are some examples of these transitions:
Previously Accepted Notions (PANs)

In almost every case where a PAN became outmoded there had been initial debate and often ridicule for the advocates of new ideas. Some were even executed for their audacity to question established notions! After all, these new ideas challenged conventional wisdom, which often dwelled at the seat of power – the Church, the monarchy or both! Some of these “heretics” were hardly regarded as the visionaries they were until they were long dead. Often, a NAN will seemingly surface quite suddenly with few realizing how many decades or centuries it had been previously advocated by a few thoughtful visionaries.

Being as we are in the midst of shifting from a PAN that’s running out of credibility to a NAN that hasn’t yet become completely clear, it can be a time of great consternation, fear and confusion. Things can appear to be in chaos and great uncertainty can prevail. Panic can set in as everything appears to be falling apart as the PAN disintegrates right before our eyes. After all, human beings like certainty. They like to rely on things being pretty much the way they had always been.

We are living in such a transitional time now, with “the Western Way” (sometimes referred to as “the American Way”) being challenged, facing an unraveling, its systems failing to do what they’re supposed to. Some are in peril even as I write this. One example: The lone superpower seemingly impotent against grassroots guerillas much like the war of 1776 when rebel colonists were the insurgents against the British Crown. Whether it is terrorists operating in cells around the world or insurgents in countries where we’ve become the occupiers, many are now wringing their hands and wondering what happened to “my America?” Why have things gotten so out of hand after the end of the Cold War when everything was supposed to have calmed down without the threat of our “reliable” enemy the Soviet Union? How do we fight an enemy who is transnational, trans-racial, indefinable in traditional terms and fanatically ideological at the same time? And why do we take it out on each other, our fellow citizens, with cruel accusations and sarcastic and disrespectful slurs? Seemingly, we don’t see an “enemy” we can attack so we attack one another with both sides holding onto outmoded worldviews!

In these times of confusion, chaos, unidentifiable enemies and great uncertainty, this is how we cope. This is how we “get our minds around this” conundrum. I propose there are alternatives.

It could be helpful to recognize that this unsettling gap between the emerging NAN and the dying PAN is something that occurs regularly in Nature, evolution and life in general. Old ways eventually die as new ways come into credibility and acceptance. Knowing this helps us to have faith that this is not the end of our world but the birth of a new one. This can be consoling, like knowing medical assistance is coming when one is injured and bleeding. Before one hears “help is on the way” one can get pretty panicky about bleeding to death.

Another is to realize how many outmoded assumptions keep the old notions in place. Like the enemies of Copernicus, Socrates and other visionaries, are we stuck in old beliefs and assumption about “the way things are” to such a degree that we are unable to see what wants to be revealed to us as the next truth, the next stage in our maturing as human beings? If we can admit that “maybe” this might be true, the doorway of willingness is opened to all sorts of new possibilities which were previously closed off to us.

For instance, could our thinking about scarcity be tied to some outmoded assumptions? In a time when all wealth was tied to land ownership, material prosperity was a zero-sum game. There was only so much land so only so many people could own it. This mental model led to separation between those who owned land and those who didn’t, the haves and the have nots, privileged gentry and peasants, etc. Yet the assumption that there’s only so much wealth to spread around is still prevalent. Times have changed even if our assumption hasn’t. Wealth is no longer solely based on fixed assets like land. Good will, reputation, popularity, ability and promise for the future have been added to the wealth generators of the modern era.

Yet we persist in acting like we have to beat the other guy if we are to win based on the outmoded assumption that there’s only so much to go around. I have to get mine before you can get yours. If you win, I must lose. This thinking and the behavior it generates is outmoded and is at the root cause of much suffering in the world. The tragedy is that most of the suffering in the world is so unnecessary!

The freedom the founders of the United States envisioned in 1776, Lincoln addressed in 1863 at Gettysburg and FDR echoed in his Four Freedoms speech in 1941, is not the kind of freedom that comes at someone else’s expense. The envisioned reality was freedom for all people! But when one holds on to the assumption “I can only be free if someone else isn’t”, this vision is impossible.

The power of our thinking – the beliefs we cherish and the assumptions we hold as foundations for our beliefs – is what makes changes in consciousness so powerful. Physical reality flows from our imagination, our ideas about how things could be. We human beings have been blessed with the ability to change the way we think. Thus we can change the world and choose to evolve consciously, on purpose.

This next step in our evolution, this natural “changing of the guard” in which an old mindset or worldview gives way to a newer one, is not as predictable as our minds would like it to be. Evolution is messy, not at all certain. A clear outcome is not always apparent. This can be nerve racking to the reductionistic mind of the industrialized Westerner that likes to be in control, seeking reliability and certainty.

As the PAN withers and dies, let us hospice it and be prepared to mid-wife the emerging NAN as it comes into the world, allowing us to take the next giant leap in our evolution. With this attitude we can look forward to the end of the old and welcome the new with enthusiasm and celebration, for a new vision will begin to take hold.