Right Relations: Where the Shamans Took Me

In early November, I attended the annual shaman event sponsored by The Pachamama Alliance, the primary charity I support. The theme this year was “Coming Into Right Relations” and featured several “wisdom keepers”  including Pat McCabe (aka “Woman Stands Shining”), a Native American shaman, Manari Ushigua, an Ecuadorian shaman of the Saparo tribe, and my friend John Perkins, who has studied with various indigenous cultures for many years. The evening event was held in The Presidio in San Francisco where we engaged one another in small group processes, chanting, drumming and inspiring exchanges about right relationships. 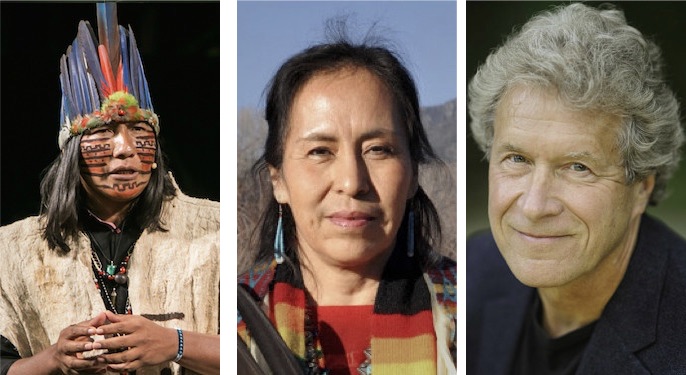 The next day, Perkins and I met for an hour or so to do some private catching up and discussion about the evening before. We talked about how we humans walk the line between the nondual world where oneness is the reality and the “pretend” world of duality, where the spiritual world and the material world are held as separate, the industrial North and the vulnerable South, this tribe and that, oil companies and indigenous cultures.

I was quite stimulated after I left Perkins and, surprisingly, I found myself thinking about right relations in a very different context – not about humans and nature, Right and Left, or all the usual suspects – but about how “un-right” (or wrong) the relationship is between the incredibly rich minority and the rest of us.

Our economic systems are the most dominant human-made systems in the world. Within this incredibly powerful system fewer than one percent of our population effectively control the remaining 99% plus. I see this as a form of economic apartheid; a small minority controlling the vast majority. This is similar to a dictatorship but does not resemble the stereotype dictator in the form of a single person like Hitler, Stalin or Pol Pot. This new form of dictatorship is a class of people who control the world’s wealth. Their wealth contributes to their way of thinking so that a “group think” goes into play where assumptions (often unexamined ones) are shared and follow-on behaviors are synchronized and even institutionalized. Therefore, as in pre-1994 South Africa, this kind of apartheid is “legal” (according to local law) but significantly immoral.

If we believe that democracy is a better system than any form of apartheid or dictatorship, that governance by a body representative of all the people is better than rule by a single perspective or point of view, then we must find this relationship between the super-wealthy and everyone else quite abhorrent.

How do we achieve right relationship in this situation? There needs to be a global mind change, a shift in the collective consciousness, from a global culture where a few are allowed to dictate or dominate the majority to a culture where the well-being of everyone takes precedence.

Perkins makes the distinction between a “life economy” that creates and revitalizes and a “death economy” which ultimately ruins the environment on which it depends. I see it as a culture of connectedness and unity versus a culture of separateness and exploitation, a culture based on love, trust and compassion or one based on fear and mistrust.

A global transformation from the former to the latter examples above starts with more and more people holding such ideas as both desirable and achievable. When we reach the tipping point, where the latter ideas become more popular and desirable than the former, then true right relationship in regard to economic democracy can be established and economic apartheid can be abolished.