In July, I published a short piece in this newsletter about a book by Belgian banker Bernard Lietaer (see link here), someone I have known for several years who seems to see the insanity in this unsustainable system, based on flawed assumptions, we call the economy. 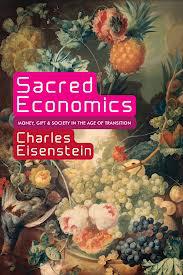 I am now moved to share some thoughts on another book I read recently, a fantastic piece of work by Charles Eisenstein who also takes issue with the state of our financial system. Its title is Sacred Economics and it drives a stake into the heart of this mysterious beast we refer to as “the economy.” I say mysterious beast because few of us seem to understand it sufficiently to realize that we’ve become entranced by it. Those who are supposed to know how it works all seem to talk as if we can continue to expect infinite growth while living in a finite world.

I hadn’t heard of Eisenstein before reading this book but several respected friends highly recommended it. Here is what David Korten* had to say about the author:

I consider Charles Eisenstein one of the up-and-coming great minds of our time. Rarely have I met a person who combines such philosophical and spiritual depth with such practical insights into the cultural and institutional origins of the potentially terminal dysfunctions of modern society – and the potential solutions.

Eisenstein starts by pointing out how the existing economic system is based on a foundational paradigm of separation and that within this ideology lies an assumption of scarcity. Furthermore, within this assumption, greed makes sense. The cards are stacked so people who own things get more and more of the pie and people who have to rent things get less and less. It is systemic and it is unsustainable.

Another idea Eisenstein puts forth is the systematic commodification of the commons, turning things we used to get for free into products we must now pay for. God-given things like natural resources, ideas, creativity, community, mutual support and even DNA are being converted to private property. To quote the author, “Things we never dreamed of paying for, we must pay for today.” How does this happen? “For something to become an object of commerce, it must be made scarce first,” he writes. The system is converting things that were once free to private property, contributing to the gap between the haves and have nots – so those who have get more and the have nots get even less. Aha! So greed can feed off the assumption that some things are scarce, and this assumption is allowed to perpetuate because the whole system is founded on separation as opposed to interconnectedness.

And how does this effect community? Monetizing things we once held as sacred, Eisenstein argues, is like “strip-mining” community. Human relationships that expressed themselves in mutual relaiance and dependency – key pieces of community – have been largely converted to for-fee services. Rather than gifting one another or relying on one another, we now depend more and more on a vendor or an app for which we must pay.

The author points to several notions that seem like wise solutions to some of us but could be seen as radical or even heretical to anyone with vested interests in the existing system. One such notion is “negative interest” where assets are devalued if they aren’t being circulated. This goes completely against convention where interest or rent is “earned” by hoarding assets.

One notion that caught my attention since it reflects the perspective I raise in The Great Growing Up: “We are in the midst of a transition parallel to an adolescent’s transition into adulthood. Physical growth ceases and vital resources turn inward to foster growth in other realms,” Eisenstein writes, “Having completed the passage to adulthood, a man or woman takes full possession of his or her gifts and seeks to contribute to the good of all as a full member of the tribe. Humanity is undergoing an analogous ordeal today. The multiple crises converging upon us are an ordeal challenging our very identity, an ordeal that we have no assurance of even surviving. It calls forth unrealized capacities and compels us to relate to the world in a new way.”

As Eisenstein sees it, we are already on our way to this new relationship with the world. For one thing, we are running out of commons to monetize! The unraveling has started.

He writes: “What is happening is that the business model that has worked for all human history (find something people do for themselves or each other in a gift economy, take it away from them, and then sell it back) is being reversed….The new economy will not come from a new beginning, a sweeping away of the old and a starting afresh; it is rather a phase transition, a metamorphosis.”

Here I was reminded of the work of GlobalGEA which sees metamorphosis as the process for such large scale change as well (also, see my guest blog from April of last year).

Sacred Economics is 600 pages long and can be a tough read but not because it is poorly written; the author does a masterful job in writing about the subject. It is a tough read for two reasons:

First, the “mystery” surrounding economics can be difficult for novices to unravel. One of my favorite quotes from the book relates to the Great Recession and the average person’s lack of understanding of our economic system. Deutsche Bank managing director Ajay Kapur wrote in a 2009 research report: “We were all drinking the Kool-Aid, Greenspan was tending bar, Bernanke and the academic establishment were supplying the liquor.” The “Kool-Aid” in this case is a metaphor for mass denial and deference to “experts” who are supposed to understand this mysterious complex system we call the economy.

Second, Sacred Economics will challenge those deeply entranced with the way the financial system currently operates. Once recovered from this state, readers will at least know where the author is coming from.

If you aren’t up to that much reading you can watch his 12 minute video, what I would call “Sacred Economics LITE” (linked here) but I heartily recommend you read the book, do the heavy lifting and not skimp by with only the video. It takes work but it will be well worth the effort if we can have better-informed players on the field.

As usual, comments are most welcome!

* David Korten is the author of several books, including When Corporations Rule the World, The Great Turning and Agenda for a New Economy