In this issue:
1. Readers’ Comments
2. Newsbits
3. July Editorial: “Thinking Responsibly”
4. Preview: Next Month’s Editorial
5. Quote of the Month – Lewis Hyde
6. Hot Link of the Month
7. Want to Blog?
8. Click and Play of the Month

A Note from Australia…

I have been receiving your newsletters for years… and whilst I have been a “silent” absorber of your wisdom, it has made a profound difference to the quality of my thinking…so, this is just a little note to say “Thank you” for the time you take to write it each month, and for your contribution to creating our future!

Warm regards from “down under in Oz,”

And Another from India

Greetings and Congratulations from Maher!

I am glad that you are completing 10 years of monthly newsletter…..May the blessings of all our women and children be with you!

I recently came across an article I co-authored with my late friend and colleague Willis Harman, whose career included tenured professor at Stanford, social scientist at SRI International and President of the Institute of Noetic Sciences (IONS). Any subscriber who wishes a copy of this eight page article, entitled “21st-Century Business: A Background for Dialogue” contact me & I’ll email you the PDF file.

Acclaimed futurist Harlan Cleveland passed away at age 90 on May 30. We were both members of the World Future Society in the 1990s and he was one of their elders. I remember the excitement I felt upon learning later that he was a subscriber to this newsletter. I had asked him if he would write the foreword to my new book, The New Human, and he agreed subject to seeing it and confirming it wasn’t pure rubbish when I was ready to send it to him. As can be seen from his list of achievements, he shall be missed.

“Drink responsibly,” reads the ad for a Kentucky whiskey. But the big headline and alluring photos in the advertisement scream “buy our product” and imply they want us to drink it. Do they fear they may get sued if customers get loaded and hurt themselves or others so they add this message to protect themselves? Does it serve as a sort of disclaimer? Or are they good corporate citizens concerned that people will overindulge unless they include the admonition? Admonition or disclaimer, the words remind me that some of us are not responsible in the way we consume. And it applies to many things not just alcohol.

When people drink irresponsibly, their judgment becomes impaired and they act strangely. They become disoriented and lose their physical coordination. They cross a threshold of consciousness that leaves them numbed emotionally, vacuous spiritually and challenged mentally.

People also do this with food, cigarettes, shopping, sex, work…lots of things besides alcohol. And many of us do it with our thinking!

You may ask, how do I think irresponsibly? I have to think. It is impossible not to think in order to function in the world.

This is true. But there’s a way humans often defer to their minds, what some call their egos, that overrides their emotions and feeds their compulsions. There is a difference between generative, problem-solving thinking and obsessing over something, what some people call “monkey mind” or the manipulations of the ego. One must think but not obsess, create but not spend untold hours chatting with oneself in an egocentric conversation with one’s shadows.

Like drinking responsibly means taking unencumbered actions minute-by-minute, thinking responsibly means making unencumbered choices. Compulsive thinking is the mind running amuck, unfettered by emotion, reason or consciousness. Obsession freezes out consciousness, spirit and feelings in order to be right about something (or make others wrong). Payoffs include manufactured self-esteem, the illusion of control and protection for persona or public image. Some people obsess about themselves, criticizing things they’ve done, going over and over past failures, imagining alternative scenarios, worrying about things that may never be.

This kind of compulsive thought is what often drives people to start abusing a substance, like alcohol or drugs, because they are able to slow down the obsessive thinking and numb out the emotions another way. You hear recovered addicts explain that the “stinking thinking” continues long after they stop using their substance of choice.

How does one drink or think responsibly? What supports people in leaving their obsessions behind?

Recovery programs and psychotherapy are popular ways. Long term recovery of the thinking behind these addictions is largely benefited by having a spiritual practice. A personal relationship with some form of power greater than oneself seems to help those who still suffer from obsessive egoic thinking after they have ceased their external addictions. They go “inside” and focus on their relationship with this power, whether they call it God, Higher Power, Nature, unconditional love or anything other name that pleases them.

This can lead one to know oneself as never before. One develops a real relationship with themselves, not how they think they are. Many recovered addicts say much of their obsessive thinking had to do with maintaining their image – the person they thought they were. Rarely, however, was this public image real. It was usually a role they imagined themselves putting forth in the world and for which they spent enormous amounts of energy.

Like the photo above, one can confuse the real tree with the reflection. When one cannot distinguish between who one is and who one thinks they are, one has an identity problem. Identifying with anything outside of oneself is a sure path to in-authenticity in relationships. When someone lives from one’s mind or self-image they cheat themselves and others from a direct relationship with their unfettered selves. They spend unnecessary energy defending and protecting their reflection (who they think they are) rather than simply being their authentic selves. 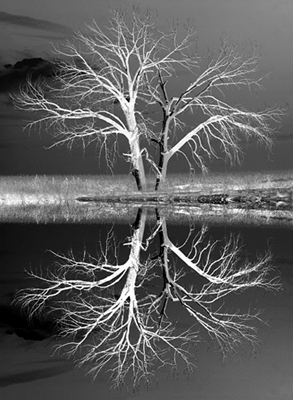 Photograph by Rosario Sapienza,used with permission

I have found that meditation, prayer and walking can quiet my mind down and ease the restlessness of my very chatty ego. My spiritual practice continues to remind me: left alone with my ego can be very dangerous for me. As novelist Ann Lamont has reportedly said, “My mind is like a bad neighborhood, I try not to go there alone.”

One day as I was walking the hills of my beloved city I imagined my life being like a corporate enterprise in need of a chairperson/CEO. As I envisioned this empty chair at the head of the boardroom table, I realized I had a choice of who would fill that seat. Would it be a God of my understanding (Nature, Higher Power, humanity or whatever form you are comfortable with) whom I could depend upon for inspiration and guidance or would it be my ego? Then I burst out laughing! What a “no brainer” decision! My ego can still help me find lost keys and remind me to call someone but it doesn’t get to run my life.

Who I am deserves a loving God in the driver’s seat of my life even if who I think I am often lobbies for my ego to be in charge. My ego is a mere mental construction while my God is a power far greater than my egoic mind. The responsible thing to do is stop turning my life and will over to my ego and start relying on a power far greater.

“A gift that cannot be given away ceases to be a gift. The spirit of a gift is kept alive by its constant donation.” – Lewis Hyde

6. HOT LINK OF THE MONTH:
Pierre Terre Productions is an independent media company producing webcast and broadcast video stories of wisdom, value, intelligence and good intent. Far more than just ‘feel good’ stories, Pierre’s stories bring the good to light and the heroic to our doorsteps. The incredible becomes the possible. Anyone is invited to send them videos for possible posting on their website.

“Dr. Quantum” (cartoon character based on the works of quantum physicist Fred Alan Wolf) explains the particles versus wave conundrum