Donna Willett from Australia writes, ‘Magnificent Failures, Marvelous Errors’ [last month’s editorial] espouses what many ‘gurus’ have said for centuries, or is that eons. Every step you take is closer to your destination so how can it be a failure or an error. Failure and error are human terms for not achieving what the mind (as opposed to the heart, or the universal wish for the individual) wants to achieve, irrelevant of any other circumstance in the individual’s life. Thanks, Donna.

Thanks also to Dr. Gabriela Morusanu from Romania for her thoughtful emails in our exchanges last month. Whether you wish your words posted here in the newsletter or prefer them to remain private, I welcome comments and feedback about my editorials.

The teleseminar I did with leadership coach Art Giser on May 17th is now available on MP3 audio. There is no cost but you need to provide your name and email address. Callers from as far as Hong Kong and New Zealand participated in the teleseminar on “Conscious Leadership.” Art interviewed me for the first half and the remainder was lively conversation with all the participants.

The June 2006 issue of Philosophy for Business, the electronic journal for the International Society of Philosophers, features an article by John; an adapted version of the article will be featured as next month’s editorial in FutureShapers Monthly.

As regular readers of this newsletter know, I’m a big fan of the South Africans who were able to end apartheid without resorting to either civil war or anarchy which many of us outside the country anticipated. They addressed the challenging transition to a democracy from a different mindset than other nations. Instead of riots, civil war or mass arrests of perpetuators of atrocities and trying them for crimes, they allowed for the truth to be told, crimes to be acknowledged publicly, emotional wounds to be healed and opposing sides to reconcile. Victims of atrocities told their tales of horror and wrong-doers witnessed the impact of their actions in this exceptional display of collective healing.

Vengeance wasn’t part of their thinking. Incarceration or corporeal punishment wasn’t part of the paradigm. Exposing the truth and finding reconciliation between the parties were the goals. Healing was the objective, not revenge. Twenty thousand people testified! No wars were waged. This was different, very different! 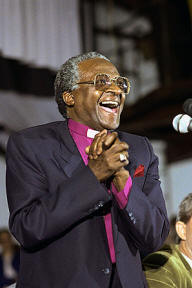 Mandela, de Klerk and Tutu were certainly major players in this process, but how did the people allow it? What allowed this exceptional process to be so widely legitimized by the citizenry?

What is it about the psychological or spiritual makeup of South Africans that allowed them to engage huge injustices, this period of monumental human rights violations, differently than nations we normally consider to be “more advanced,” like the U.S., Israel or England? These questions have piqued my interest in visiting these unusual people, knowing they have something very special to offer the world.

I still haven’t made it there but I recently had a conversation with a woman from South Africa who shed some light on my curiosity. I told her I admired how the people resolved apartheid and the work of The Truth & Reconciliation Commission in the mid-1990s. Then I asked her, “What is so different about your country that it embraced this approach instead of the militaristic-retribution model that dominates the daily headlines throughout the world?”

Without much preamble she told me it had to do with “ubuntu” – the centuries-old African philosophy that centers on a belief in the interconnectedness of all people. She told me the African culture was steeped in the understanding that each person’s “beingness” was dependent upon and tied to every other person’s “beingness.”

I since learned this system of African values underpins large parts of the continent’s social culture and is now considered the backbone of the new South Africa. Unbuntu serves as a unifying philosophy in a society previously divided and ravaged by apartheid. Ubuntu means “humanity” or “humanness” and is widely accepted as essential in the transformation of all South Africa’s systems. The African saying “Umntu Ngumntu Ngabantu'” means “a person is a person through other people.” Ubuntu has played a major role in the forging of a national consciousness and continues being vital in the process of nation-building. This philosophy is defined within an intra-governmental context as having four components: 1. the equality and dignity of all people; 2. an emphasis on humanness and brotherhood/sisterhood of humankind; 3. the sacredness of life; and 4. the most desirable state of human existence. Ubuntu appears to be the spiritual foundation of South Africa.

In his 2004 book, God Has a Dream, Archbishop Tutu writes ubuntu “is the essence of being human. It speaks of the fact that my humanity is caught up and inextricably bound up in yours. It speaks about wholeness. It speaks about compassion…. In the traditional setting, when people quarreled the main intention was not to punish the miscreant but to restore good relations.”

How radical is this idea to the Western mind? Imagine a world where transgressions are resolved embracing this philosophy. Imagine your well-being tied to everyone else’s well being; win-win; Spaceship Earth; all or none. In stark contrast, the culture of the industrialized West is steeped in individualism which is often about winning at someone else’s expense; win-lose; me first.

While I feel much better-informed and inspired by yet another indigenous culture’s perspective on life, I cannot help but wonder: What keeps “developed” nations acting so barbarically toward one another? It might be easier to understand our brothers and sisters shooting one another and neighbors with differing religious beliefs fighting if the South Africans hadn’t given us this model of an alternative way. The only explanation I can muster for ignoring this peaceful means of reconciling differences and, instead, seeking vengeance and perpetuating bloodshed is that we must like it..

“Guys like to blow things up and then try to control the explosion.” – anonymous