There is a crisis negatively affecting leadership in all sectors. It is the lack of true commitment and I see this crisis as a global epidemic. 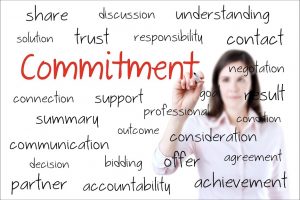 Much of the positive developments in our history as human beings have been the result of true commitment. However, true commitment is one of the scarcest human qualities today. People say “yes” or make agreements every day that they hold as tentative in their minds, subject to whim and convenience. As a result, we live in a world filled with empty promises which lead to widespread social cynicism which, in turn, leads to lowered expectations. What people say is often quite different from what people do. As an old saying goes, “We judge ourselves by our intentions while judging others by their actions.” If we judge ourselves with the same criteria – our actions not our words – then we may start to see how culpable we are in this weakening of our social fabric.

It is so easy to give lip service to doing the right thing, stating the moral high ground, saying what people want to hear but an entirely different moral toughness is required to keep our word – to do what we say we are going to do. After years of hearing these tentative “commitments” the rest of us have gotten used to people reneging on their promises and not keeping their word. The worst of it is that it has become “socially acceptable”; we have grown accustomed to people failing to do what they say and we let them off the hook. Empty promises have become quite common.

Here are a few suggestions for making and keeping commitments:

One of my favorite quotes about commitment is from explorer William H. Murray who wrote quite succinctly in his 1951 book, The Scottish Himalaya Expedition: “Until one is committed, there is hesitancy, the chance to draw back, always ineffectiveness.” As I mentioned at the start of this article, recent years have seen a collective backing away from true commitment and, what is even worse, we let people get away with it by not holding them accountable. Our passivity is complicit in this decline of commitment.

Let us stand for optimism about the future and hold one another accountable for the promises and the commitments we make. Perhaps we can restore our faith in one another and trust we mean what we say, keep our promises and stay true to our commitments. If we do, cynicism will fade and our collective attitude about the future will significantly improve.