Who’s Insane Anyway? Is It Just Me … or Is It Everybody Else?

Home » Mini-Keynote Editorials » 2007 » Who’s Insane Anyway? Is It Just Me … or Is It Everybody Else?
Email
Print

“Makes You Think” Video Shorts
Just a few minutes long, this video was produced by Jason Ables for GlobalMindshift.com

If you have something you would like to share with me or others subscribers based on anything I’m written about here, recently or in the past, send me an email at john@renesch.com.

Free Download Available
For anyone who may have missed it, I’m offering a free download to the Epilogue which was added to the 2005 edition of Getting to the Better Future; if you have an earlier edition of my latest book and would like this supplement or don’t have the book but would like the essay anyway, feel free to read and download this nine page essay.

The illustration in the movie poster below depicts a naked WWI British soldier which makes no sense by itself unless you know the story of “The King of Hearts.” One of my favorite movies of all time, this 1967 movie centered on a small European town which the Germans had just abandoned as they retreated from the advancing Allies. The city was deserted except for the asylum for the insane on the edge of town. A British unit was ordered to hold the town which was a welcome respite from battle. They soon discovered the residents of the asylum who appeared quite benign, friendly and frivolous. They invited them, including several delightful young women, to join them in town. This resulted in one big party! 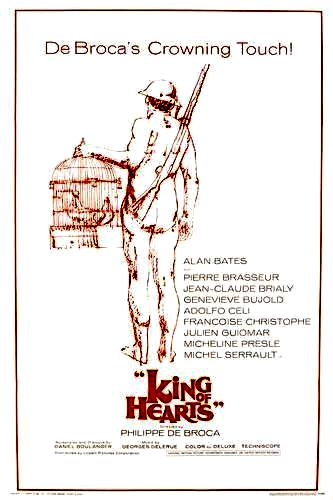 Several days later, the unit was ordered to retreat. The Germans had mounted a counterattack and were now advancing back toward the town. The soldiers sadly packed for their withdrawal and prepared to depart. The men and women from the asylum slowly returned to their familiar home, trailing remnants of their joviality and gaiety. They closed the gates behind them as they bid farewell to the Allied soldiers. The lead character in the movie, Private Charles Plumpick played by Alan Bates, seemed to be going along with his unit until the last minute. As the camera frame focused on the closed gate of the asylum, the buttocks of a naked man came into view. Carrying a birdcage and wearing his helmet but nothing else, Bates started ringing the bell to be admitted.

This closing shot from the movie has stayed with me for over thirty years. It vividly challenges the status quo where war, violence and destruction are seen as the domain of sane people and the alternative reality is seen as insane. For a few days, the soldiers in the movie enjoyed playing and relaxing, partying and loving. Then they were rocked back into “reality” and returned to the consciousness with which they had been operating before coming to this town. They shifted back into their military characters as if they were actors going onstage. It seemed their voices and faces changed as they got themselves back in form to follow orders and rejoin the war.

Having attended many years of weekend retreats and off sites, I have experienced magical times with colleagues where closeness and insight mixes with fellowship and spirit resulting in deep soulful connections and life defining moments. Then, usually on Sunday morning, people are prone to say, “Oh well, the last few days have been really nice but tomorrow it is back to reality.” Heads nod in agreement and sadness steps in at the thoughts of returning to the routines of daily life and work.

Now, when I’m addressing groups in similar settings I counsel them to observe their thinking and see if they have this tendency to invalidate a fantastic experience by making or agreeing with a remark like this. The underlying message is: “This wonderful experience is NOT reality so don’t take it too seriously.”

These thoughts mark the return of the cynical part of us who rides shotgun with our resigned, coping, negative selves who manage to function in the insanity of the world. After all, isn’t it the cynic’s job to justify the insanity? It is hard for the ego mind to see the beauty and joy of being connected with others. It will not easily admit the feeling of oneness is more natural and more sane than the world it constructed “out there.”

Were we spending time in an insane asylum or taking a vacation from it? On which side of the gate do we leave our clothes and stand naked waiting for the more sane world to let us in, or out?

I’m reminded that “sanity” is a legal term largely defined by social consensus. Blowing up innocent civilians is deemed “collateral damage” when committed by consensus-legitimated militias but “terrorist” when committed by groups without sufficient consensus or mass legitimacy. Aren’t both actions insane? Not legally if consensus says “yes” to one and “no” to the other.

Consensus is based largely on reason and rationality as defined by the collective. If we want to see big changes in the world, we have to get ourselves out of the box of defined reasonableness, going-along-ness and rationality. Perhaps we have to embrace what they collective would define as “insane” for it may lead to the kind of reality we really want. After all, the so-called “sane” path seems to be leading us to our own destruction. As George Bernard Shaw has written, “The reasonable man adapts himself to the conditions that surround him. The unreasonable man adapts surrounding conditions to himself. All progress depends on the unreasonable man.”

“Once we have experienced the unity and interconnectedness of all things, love is no longer the commandment, but the natural expression of our own essence. It will no longer appear as an action required of us, but as the way of being of transpersonal existence. I’m aware that this might sound a bit pie-in-the-sky for some people. Nevertheless, coexistence worthy of our humanity will remain impossible as long as we fail to experience this reality.” – Willigis Jaeger

Veriditas, The Voice of the Labyrinth Movement, a non-profit organization dedicated to introducing people to the healing, meditative powers of the labyrinth. The work of Veriditas centers around the Labyrinth Experience as a personal practice for healing and growth, a tool for community building, an agent for global peace and a metaphor for life.